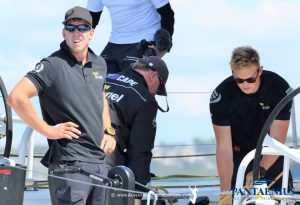 Clean Report
Surprise! Our world exclusive scoop was confirmed by the folks at VOR today when they announced Pete Burling has joined Bouwe Bekking for the Dutch skipper’s 430th lap around the planet.  Maybe more importantly, this shot from the Sailor Girl’s excellent Fastnet coverage shows supernav Andrew Cape aboard the bumblebee colored boat as well.  Bouwe adds Capey and a golden boy who will undoubtedly be the fastest downwind driver in the fleet, and for us, there are now three clear favorites for the final crown of the VOD65 era.  Yes, it’s a bit early for form guides, but now’s as good a time as any if you’re looking to place your bets.  Our early call for the podium is below, in order.