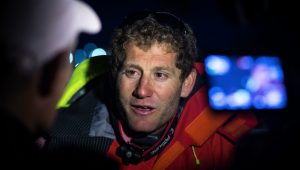 As the dust began to settle after what had been – and although it is much overused – the ‘epic’ battle all round the race track a few insights started to come out from the teams as they started to unwind.
A clearly exhausted and from the video right after the finish, an emotional Charles Caudrelier commented “It was a nice fight with Mapfre” also stating that it was “very difficult to be ahead and to stay ahead” and adding “What I know now is it is going to be a very difficult Volvo”.
In the end, they had been helped to the win by a cloud that helped them come back. It also transpired through an interview with Carolijn Brouwer that Dongfeng were getting incomplete navigation information due to a fault with their on-board electronics which made it “feel a little like blind navigation and blind sailing” she also said it was a “team effort and everyone put in 100%, 200% and it really paid off”.
This small squall was confirmed by an obviously disappointed Mapfre skipper, Xabi Fernandez.
With shades of the battle down the New Zealand coast between Peter Blake’s Steinleger and Dalton’s Fisher & Paykel when the ‘Big Red’ spotted a squall which ‘Fish Pie’ missed, Dongfeng were able to drop their masthead zero and pass while Mapfre were overpowered by not making the same sail reduction.
Crossing the line in 3rd, Bouwe Bekking’s Brunel “had done extremely well” according to their skipper and has “all dug in 100%” and had “learnt a heck of a lot” which for a team that has been together a relatively short period of time perhaps the most important thing.
Simon Tienpont from Akzonobel, a long time leader in the earlier part of the race to The Rock thought the race was hard and every time you thought you had got away the back of the fleet came back at you.
Further down the fleet it was good to see a more circumspect and realistic David Witt who pretty accurately described the event as a “700 mile match race” (with perhaps a 5,000 match race to come.) Admitting to errors while also stating there were some promising signs for the team and that we “showed we are pretty good in the light”. Good to see some humour from him as well while admitting there is still a lot of work to do. It will be interesting to see him and his team meeting the challenge in the months ahead, as I am sure they will.
Perhaps the most relieved after the Dongfeng crew was Ian Walker (skipper of Abu Dhabi) who tweeted that their 2011 Race Record was now safe for another couple of years at least.
No doubt that first or last, having been training for 6 months or more, just a few weeks or even with a team not yet fully confirmed it is hard for us armchair admirals to appreciate just how valuable these racing miles during the Leg 0 events are for all the teams, building skills, building relationships and building trust in each other.
I remember sailing an in port a few races back with Ken Read on Il Mostro and wondering at how quiet and ‘automatic’ the manoeuvres were – almost telepathic – that is a level that some of these teams are closer to, I am sure, than others.
There are 2 more Leg 0 races to polish the ‘Magnificent 7’. (sorry couldn’t resist that)
Only time on the water will help close that gap – as if 56 seconds wasn’t close enough already.
Shanghai Sailor