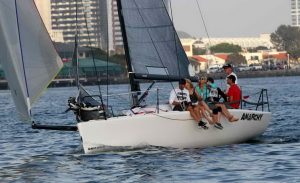 When I bought my Melges 32, I had few illusions that there would be a class in Dago. I bought it for the fun of racing it, knowing that PHRF was the only game, and it was a ball. We raced almost everything there was here for a year and half, won a lot and had a blast.
A few people saw how fast it was and started buying them. There ended up being four boats here with a couple people talking about getting one, but that never happened.
I sold my boat a few months ago, and we hear the M32 Precepts just got sold. Willem Van Way’s M32 lives in Coronado and is rarely seen, and there are rumors that M2 has the same kind of water intrusion issues that we had. That isn’t fun.
As for PHRF racing, there just aren’t enough sportboats that actively race to form decent class sizes. It is far too common to see only 3 boats in a class. Blame the lazy owners who don’t come out, and PHRF dago for ostracizing sport boats. The bias, self-interest and ineptness astounds.
So any thoughts of an OD class were dead on arrival and that sucks. One of the problems with owning and actively racing a 32 is the enormous pain in the ass it is to launch and pull the boat out of the water. It really is arduous and given that there is almost no dry storage available at SDYC, means having to keep the boat somewhere else and tow it to the hoist. That is why I kept mine in the water (with a Durepox epoxy bottom and weekly bottom wipe downs) – it was just so much easier to go sailing.
And the boats are pretty demanding, in a good way, but still it takes a lot to make it go and manage the beast. I have never loved a boat as much as the 32, but it is easy to see why they have a very limited appeal.