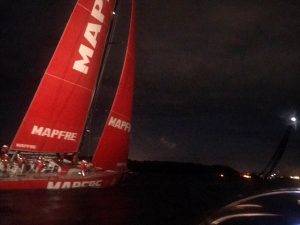 Having rounded ‘The Rock’ in 1st and with a comfortable (for this fleet) lead Dongfeng stood on further south for (presumably) faster angles but Mapfre sailing a shorter distance, took the lead back and there they remained until we woke in China with 30 miles to Plymouth and a resurgent Dongfeng hunting them down.
As I started writing this article the fleet were heading towards the finish line where VOR CEO Mark Turner and CNN’s Shirley Robertson were reportedly waiting in a RIB – in the middle of the night, now that’s dedication.
Barely had I started typing than the tracker’s latest update showed DFRT had clawed back Mapfre’s lead then typing had to stop as the Chinese boat sailed more southerly than came up on Mapfre just in front.
Edge of seat stuff with Charles’s crew edging over the finish line a mere 56 seconds in front of Xabi and his guys. That’s Mapfre pictured left, following behind the white masthead light on Dong Feng to the finish.
Two places to be in the lead in The Fastnet Race – at the Rock and, of course, at the finish. A useful psychological double for the Chinese team.
It was almost too easy with the almost match race between these two to forget there were others in the race, but of course there were, most with their own pieces of glory.
Brunel, perhaps the third of the ‘favourites’ triumvirate crossed next with Simeon Tienpont bring in Akzonobel in 4th all almost within the time it took to draw a couple of breaths, grab a fresh cup of coffee and get back to the keyboard. Akzonobel must be pleased with their race as they took it to the top three, particularly in the early part of the race and showed this team has some excellent pace, especially upwind although their downwind speed let then down a little. Of course as they become more familiar with the correct polars, sail selections and angles they are likely to become more of a force as the race approaches.
That is not forgetting Brunel with Skipper Bekking having unfinished business. This quiet professional brings more to this edition of the Volvo than any other and is living evidence of the expression that when the going gets tough….. and this wasn’t exactly the toughest Fastnet ever from a weather point of view.
Further down the fleet Vestas led the rear-guard with the 8 man Scallywag in second from last spot and Dee Caffari’s 10 person team perhaps unsurprisingly in last place with the crew only being formed in the last few weeks, in fact if I understand correctly not all even confirmed as yet. Even so Turn the Tide on Plastic at times showed remarkable boatspeed in this race and although last in class in THIS Fastnet she has been less than 2% off the pace overall.
So now the fat lady can shut up!
At this rate it is going to be a very long 9 months staring on October 22nd in Alicante.
Better get the strong coffee and heart pills on order now guys.
Shanghai Sailor