kids in the yard 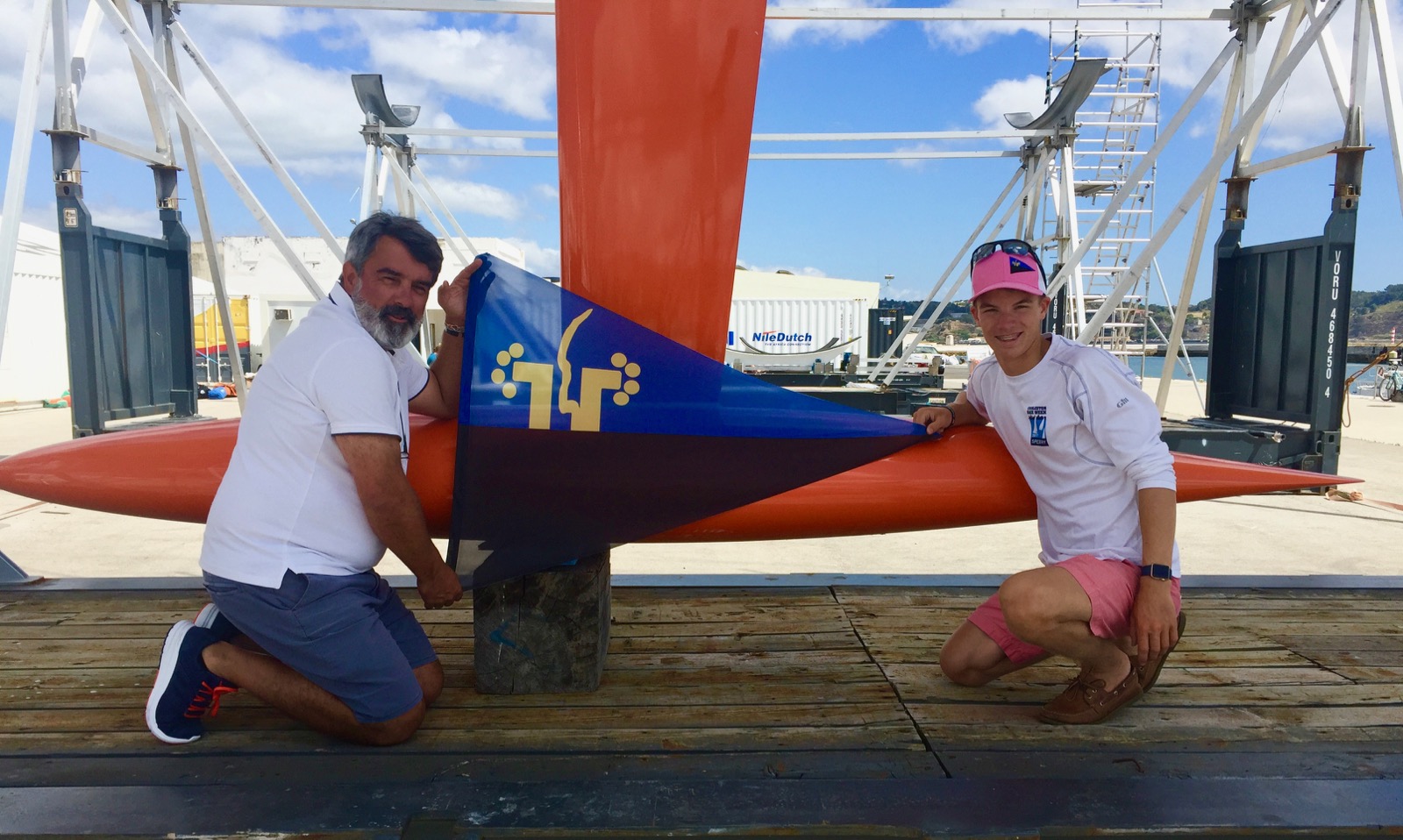 We don’t know yet whether Mudratz grommet Peter Cronin has what it takes to be an all-star professional racing crew, but we’re quite sure he’s already got what it takes to be the youngest On-Board Reporter in the history of the Volvo Ocean Race when the next race starts in 3 years.  We’ve been following Peter for a while now – Clean actually spoke to him last year for the SA Podcast during the Mudratz’ youth Melges 24 campaign – and he just continues to impress everyone with his energy and ability to share his experiences with the wider community.  Huge thanks to our Boatyard pals Bicey, Rodrigo, and Amalia for taking time out of their busy schedules to help fire up the next generation, and for understanding just how important that is.  Got teens? Share this with them.
You don’t have to be an old man to look back and reflect on your life, and I guess I’m lucky to have some wild examples of how seemingly unrelated experiences, chance encounters and everyday life events can come together over time, leading to opportunities one could never had imagined or even dreamt of. I am 17, and in 2 short years I have been fortunate to live a dream.
In March of 2017, after my grandfather’s passing, I learned I would be traveling with my grandmother to Portugal to spend a few days in the countryside and Lisbon. I would then travel to the UK for a few days, and end the trip by sailing across the Atlantic Ocean on the Queen Mary 2. It was to be a memorial trip, a trip that they had been planning for years; a trip he sadly would never take.
There are aspects of this vacation that any traveler would fall in love with: The blue water of Cascais, Portugal; the vineyards that seem to go on forever in the rolling hills to the North; the walled city of Obidos; or perhaps the area of Nazare, home of the biggest wave ever surfed. Yet when I was told we would be spending 4 days in Lisbon, the capital of Portugal, only one thing came to my mind. Not the awesome restaurants, the 12th century buildings or the 21st century shops — but the fact that it was the Volvo Ocean Race (VOR) Headquarters. I knew that I had to break away from my family and somehow make my way into the Volvo HQ, even if just to look through the locked fences.
Two days before I left for Lisbon, my skipper Zach and I sailed our third Secor Volvo Fishers Island Sound race. We were sailing to defend our last two victories, but on the last race of the last day, we lost our grip on the lead we’d held throughout the regatta. I was commiserating with one of our biggest supporters – Sailing Anarchy’s Alan Block – and talking about writing an article on the race, and I wasn’t quite sure what he planned when he asked me what my schedule was in Lisbon, and if I thought I could escape the family for a day.
A day and a few texts later and I had an invitation from VOR communications boss Rodrigo Rico to come and check out The Boatyard! 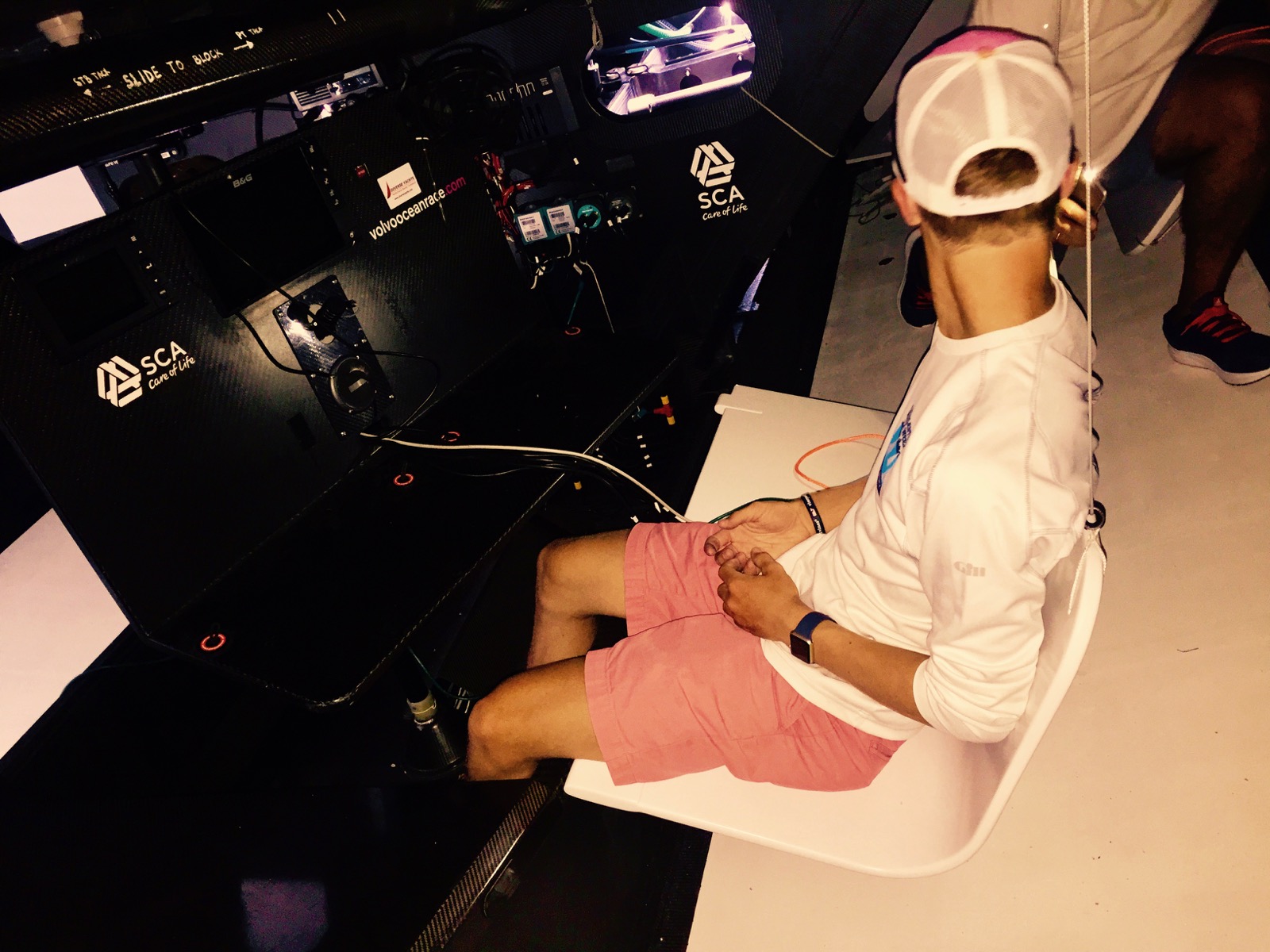 It seems like ages ago when, as a 15 year old during the 2015 stopover I fell completely in love with the Volvo Ocean Race. As a young sailor, as part of our sailing club the MudRatz, I had been lucky enough to get a tour of parts of the VOR race village, meet members of the crew from Team Alvimedica and sail on an M32 catamaran. I was able to manage 3 visits to the village during that stopover, and my love of the race has only grown in the years since. The idea of getting a personal tour of the race HQ was a dream come true. Actually, it was beyond any of the dreams I had!
The days leading up to my visit to the boatyard were spent touring Portugal, but my mind stayed focused on one thing: The Boatyard. When I met Rodrigo and began learning about the Boatyard operations, my idea of “one design” was completely redrawn. While I understand the importance of the boats being identical, when Rodrigo explained the processes by which a hull was refitted and put back together, it blew my mind. He explained that for all eight boats, the same person would do the same job for each boat to ensure that there were no discrepancies between them.
For the past year, the VOR boatyard has been busy refitting the boats for the upcoming start. Rodrigo walked me through the stations of the boatyard where specific steps for each boat were completed. He explained to me that there were three steps that were completed indoors before the boat was ready to be set on its keel. Upon arriving in Lisbon, the boat was sent to stage one where the entire hull was taken apart and every single piece of equipment was logged. From gears in the winch pedestals, to bolts in the engine, every single part of the boat was recorded to perfect duplication between the boats. Furthermore, every inch of the hull and all the parts of the boat were examined with ultrasound to make sure there were no structural weaknesses.
After completing the first stage, the hulls were put back together and sent to stage two. First the hulls (including the centerboards) were sanded and washed, with the same pair of men that have sanded every other boat in the Volvo fleet working together, plank sanding the entire hull. By using the same people for the same job there is no doubt each boat is 100% identical and no one boat is faster than the other. After the boards were completed and the hull smoothed, the boats moved onto the third and final stage that was completed indoors. 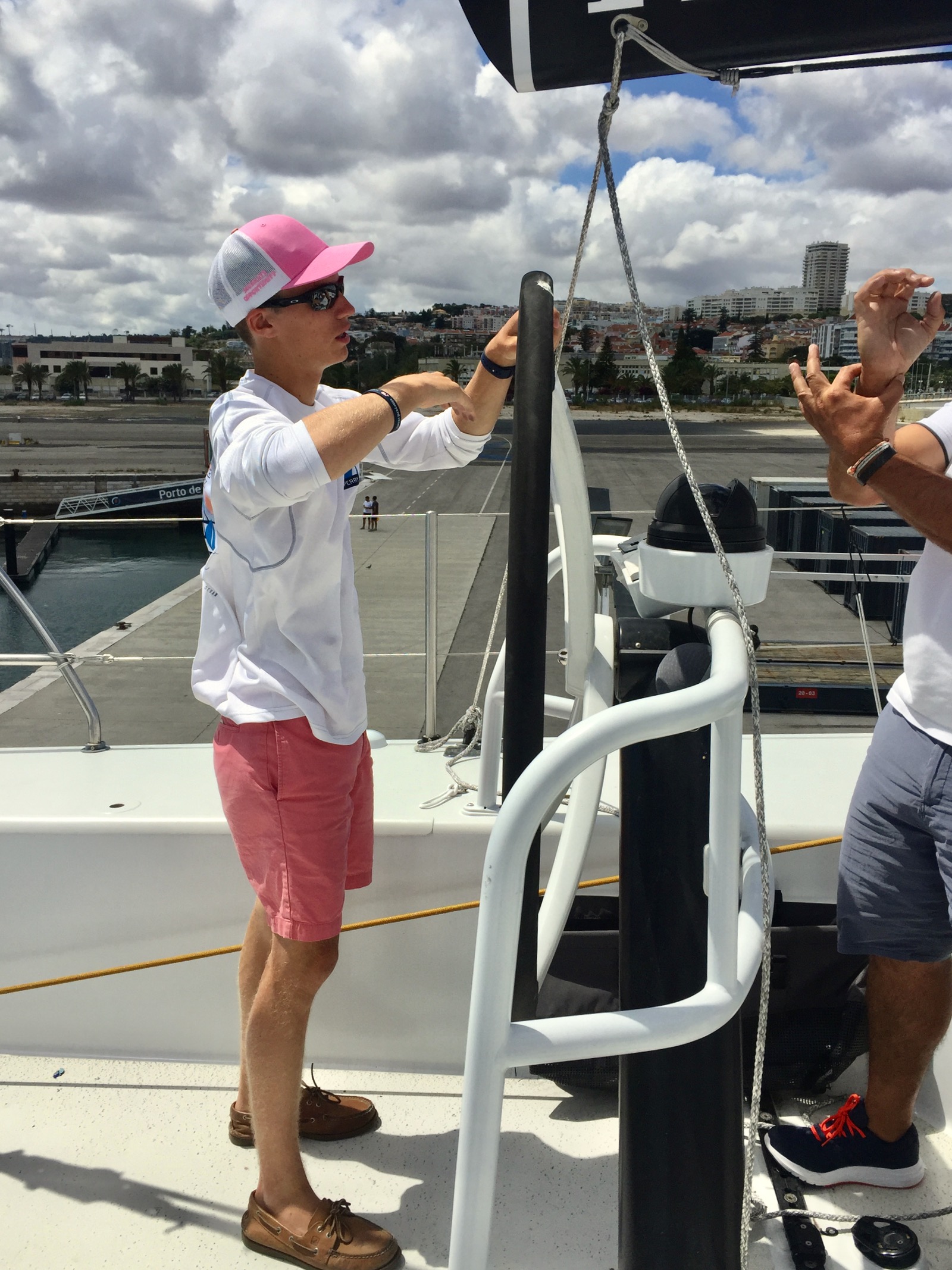 Here, in stage three, the cosmetics of each ship were born. Rodrigo walked me into what looked like a run of the mill storage container but, upon opening the doors, I was amazed to see a fully automated paint mixing machine and the shelves fully stocked with paint. Because carbon fiber can be damaged when exposed to prolonged periods of UV, no carbon can be left uncovered. By having a fully automated paint mixing station, they can customize paint colors in quantities as small as a pint – this allows for minimal waste and exact duplication of colors. After the paint is mixed, the same team that has painted all the boats before, gets to work in covering each square inch of exposed carbon on the deck. After a strict inspection of the boat is completed, the boat moves out of the protection of buildings into the light of day, where fitting of its keel, mast, and communications tower began.
Because all of the boats had already been through these stages, there was no action in those areas of the boatyard, but the Sail Loft sure was busy. The first thing that caught my eyes were a stack of battens – in my experience, a little fiberglass stick perfect for giving splinters or dropping overboard before a regatta. I laid my hands on a batten that was easily 10 feet long and made purely of carbon fiber. As if that wasn’t enough to get my mind spinning, laid out in front of me was the largest sail I had ever seen. The square top alone may have been longer than an entire 420, and the main is nearly 100 feet tall! Covered in baby powder to protect it from moisture, the sail of team Turn the Tide on Plastic was getting its custom designed paint job. I knew that these sails needed to be made rugged, as they were about to go some 35+ thousand miles around the earth and experience unimaginable loads, yet the sheer strength and ruggedness I could feel in the sails was more like some kind of steel than any fabric I knew. I wish I could have seen an A3… Of course, that wasn’t nearly as mind blowing as getting to meet Dee Caffari, skipper of Team Turn the Tide on Plastic, when she came in to inspect progress on her sails.
As if the day couldn’t have gotten any better, Rodrigo took me somewhere I had only ever dreamt of being. Though four of the eight boats were scattered around the world, the other four were staying in Lisbon. Two were out practicing, team Turn the Tide on Plastic sat in the dock, and the last boat to reveal its team was on dry land towering nearly 20 feet in the air as it sat on its bunkers, awaiting its wrap. Rodrigo took me out of the sail loft and we began making a beeline towards the hull.
It isn’t too often that I find myself at a loss for words, but this surely was one of those times. I had just stepped on board a Volvo 65S, one of the boats that will be sailing in 2017-18 Volvo Ocean Race. As Rodrigo took me through the vessel, I felt like a kid in a candy store. From the hydraulic rams which control the canting keel, to the joystick for the remote controlled on-deck cameras, to the massive steering wheel, I just couldn’t take it all in at once. As we continued to go through the boat, I learned about the intricacies of systems I only had vague knowledge of: the desalinators, camera controllers, hydraulic systems and state of the art electronics. I got to feel firsthand how cramped everything is below decks, and I can only imagine how tough the conditions really can be, underway in the most challenging ocean race conditions…though that still doesn’t stop me from dreaming that one day I’ll be racing on a Volvo Ocean Race boat!
The next time I come in contact with the Volvo boats will be in the spring of 2018 in Newport, and it can’t come soon enough. I’m excited to watch the race and I know I will see it from a different perspective based on everything I learned at the Volvo Boatyard. Perhaps in 15 years MY name will be on the roster for the Volvo race.
-Peter Cronin, Mudratz.