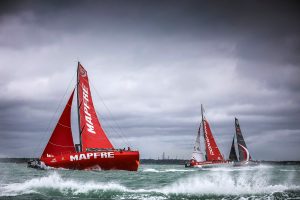 In their first head to head battle the newly revamped Volvo 65’s were put through their paces yesterday and a little history was made along the way. Billed by the VOR as Leg 0, the seven refitted VOR 65’s were really put to the test in the around -the-island race. The island being the Isle of Wight on England’s south coast. With winds gusting above forty knots kicking up lumpy seas, some of the aerial footage looked as if the boats were pummeling along in the Southern Ocean.
Leg 0 is a series of four races. The one around the Isle of Wight, the Fastnet Race which starts this weekend, a race from Plymouth (where the Fastnet finishes) to St Malo on the north coast of France, and a final race from St Malo to Lisbon in Portugal. The races do not count toward the actual Volvo Ocean Race itself, but is a way for the top teams to assert themselves. Bragging rights if you will.
The race was dominated by Xabi Fernández and his Spanish crew aboard Mapfre. I was particularly thrilled to see them turn in such a good performance because they were the first team to embrace the idea of additional crew members if some of the additional crew are female. There are two women aboard Mapfre. As a side note five teams have announced that they will have female crew. Bouwe Bekking, skipper of Team Brunel has not announced either way, and chauvinist David Witt, skipper of the Hong Kong entry Team Sun Hung Kai/Scallywag has announced that there will be no place for women on his team. I am wondering if the Scallywag part in the team name refers to the skipper.
Mapfre dominated and along the way set a new record for the race. Their time was 3 hours 13 minutes 11 seconds, in fact the first four VOR 65’s to finish all broke the previous record. Mapfre will have bragging rights going into the Fastnet Race which starts the Sunday, August 6. Check the video here.
– Brian Hancock.