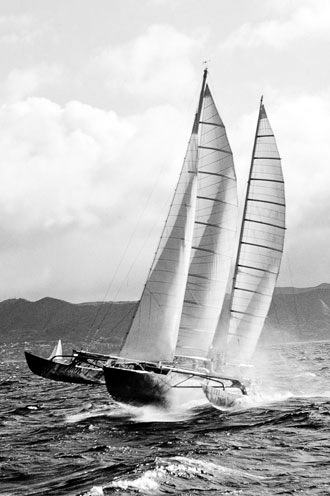 You have a great story of Eric and PD VI with the depleted Uranium keel, but there is the equally stick it up your butt story of Pen Duick IV. My wife and I had signed up as members of the AW yacht club to put up pictures and standings for the Transpac boats all over Waikiki in 1969. I had cut class to be sailing out of the Ala Wai early one gorgeous morning on a new fiberglass sloop to watch the winner come across the finish line between the lighthouse and Diamond Head buoy.
We were pounding along to weather off Waikiki when I heard a sizzling noise from aft. I looked back to see a strange something, a spider sitting on 3 aluminum-colored tubes with 2 big sails. They zoomed closer showing 2 big mainsails and threw spray high into sun as the flew past us like we were sitting still. “What the hey is that thing?”, I squeaked, awestruck. It had 2 huge yellow mains with full battens, schooner rigged.
They flew about 4 miles to weather to pass by Blackfin, the TP leader several miles away, plowing downwind with a bone in their teeth. The strange boat tacked to pass behind BF, then jibed and popped 2 chutes, to fly away from the TP leader down past us to the finish line with incredible speed. The stranger dowsed, then repeated this event, slicing upwind past us beyond to round Blackfin a second time, then jibing and putting up both chutes to cross the finish line again in front of Backfin. It was totally amazing to me, but then I found Eric at the Ala Wai, and got the whole story. He told me about this new unpainted trimaran and described the speed, pretty much unknown at the time.
PD had started to Hawaii a day later than the regular yachts, and finished a day earlier. But this was not admired. This was the first time I had heard that multihulls were not really sailboats, and that this was just unjustified trickeration. (Oop, that wasn’t invented yet) . However I was not convinced, as there were slow and heavy P-cats, but just 1 Hobie14 and no Hobie16s had yet made it to the Islands…that was all to come. Eric leads my heroes, but I have been fortunate enough to meet Woody Brown and even Hobie himself, among my multihull pioneer heroes.
Anarchist dacarls.

old man and the sea