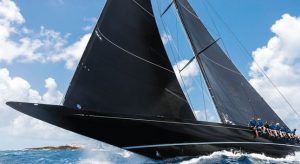 In the 1930s, when the rule was first introduced, J-Class yachts were the pinnacle of world yacht racing. But by 1940 many had been stripped or broken up for scrap metal for the war effort or just abandoned and left to rot in mud berths. Decades later several of these leviathans have been rebuilt and restored and are now part of a healthy and spectacular racing class that has also witnessed a number of new builds… or ‘new old’ builds. And as the level of racing in a remarkable fleet has increased so inevitably has the demand for ‘faster’ technology. Enter Southern Spars.
Naturally modern design, manufacturing processes and materials allow a company like Southern Spars, immersed in grand prix sailing, to make those towering J-Class rigs massively lighter than their original predecessors – most of which were fabricated in steel.
But since the first carbon mast appeared in this specialised fleet the race for even lighter rigs with lower VCGs has powered inexorably onward. For example, the recent upgrade of the Hanuman rig package yielded a saving of more than 800kg across mast, boom and rigging compared with its carbon predecessor. The previous rig was built by another manufacturer just a few years ago and yet this latest weight reduction is the equivalent of removing 10 crew sitting on the second spreader. Even on a yacht this size that’s a big gain.
But Paul Snape, head of mast design at Southern Spars, says the benefits that such an upgrade offers extend far beyond these substantial weight savings.
Read on.

read all about it