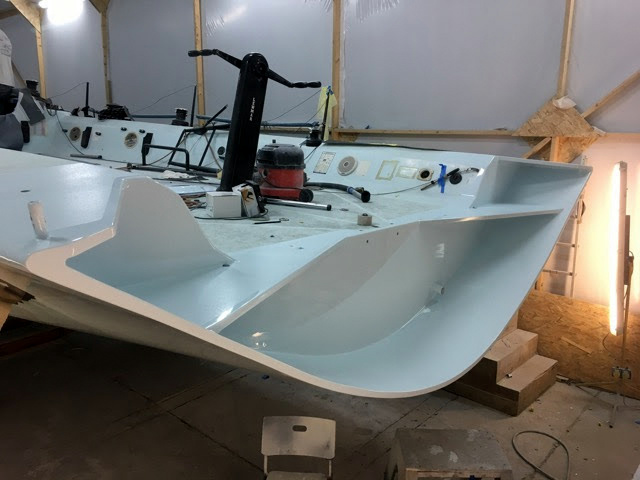 The latest edition to the FAST40+ Class is the Ker designed Signal 8. The boat no stranger to racing in European waters, having competed in the boat at Cowes Week and Cork Week in 2012. Signal 8 was shipped to the UK earlier this year and is undergoing final modifications by John Corby in Cowes, as directed by Ker Yacht Design.
The project to Jason Ker’s designs and McConaghy’s build, changed the keel to a lighter deeper one last summer, and extended the bowsprit to allow bigger kites. They also increased the mainsail girths about as far as they could practically go. That made the boat quite a bit quicker, but never really got enough wind in Hong Kong to really light her up. She was shipped off to Genoa and then on to Southampton after a short spell at Yacht Club Italiano, thanks to Eddie Warden Owen and Chico Isenburg.
They pulled the trigger on the final mods we had already discussed with Jason Ker: a transom scoop and a rocker reduction. Can Ergun and his guys at CSC Composites in Turkey made the main pieces, and John Corby did the building in Cowes in his usual awesome way. Andy Pilcher and Richard Bouzaid at Doyle Sails NZ have made us some big new jibs to go with the other big gear they’d made, so they are basically as powered up as they can get.