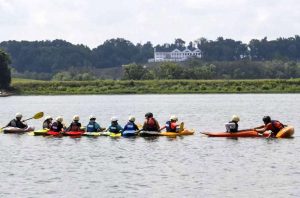 The Trump family has offended many sectors of establishment Washington since their arrival in the nation’s capital, from Langley’s spymasters to mansion-dwellers in D.C.’s Kalorama neighborhood.
But 30 miles north of the White House, a conflict is now brewing on the banks of the Potomac River that pits the president’s interests against those of a very different – if no less zealous – constituency. This one is armed with paddles.

Citing security concerns, the U.S. Coast Guard says it is adopting a policy of periodically cutting off access to roughly two miles of the Potomac where it borders Trump National Golf Club in Sterling, Va. The restrictions would clear the water of canoes, kayaks, stand-up paddleboards, sailboats, jet-skis, motorboats and anglers when Trump or other senior officials of his government decide to spend a day on the back nine.
The buffer zone is stoking intense concern and opposition among recreational users of the river, who range from Olympic athletes to injured soldiers. The proposed shore-to-shore security area includes Riley’s Lock, the embarkation point for a popular summer camp and a kayaking program for wounded and disabled veterans.

the bridge of the ganja