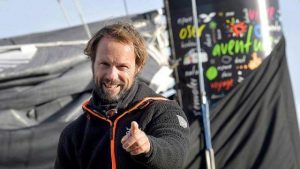 Another record has fallen and this one is huge. And not surprisingly, set by a Frenchman. What’s in the water over there that produces these amazing offshore sailors? Last Tuesday Thomas Coville set off from New York in an attempt to break the single-handed Transatlantic record; eastbound. Unlike his fellow countryman Francis Joyon (who set a new Transatlantic record last week) Coville waited for the perfect weather window and when his team deemed it right he took off like a slingshot with the hope of a crossing in under five days.
Joyon’s time was just over five days. After 4 days, 11 hours, 10 minutes and 23 seconds Coville, aboard his massive trimaran Sodebo, passed Lizard Point on the west coast of England to claim the new record. An online video shows him communicating with the person posted to record the moment he crossed the imaginary line. The observer gives him his time and Coville bursts into tears. Can you imagine the emotion and fatigue that he must have experienced at that moment? Coville mentioned later that he had slept a total of four hours since leaving New York. “These boats are very powerful and we are on a razor’s edge the whole way,” Coville said, in somewhat of an understatement. His average speed was 28.35 knots; average. It’s no wonder he didn’t sleep.
I don’t think I need to gush on about what an accomplishment this is. I think you, dear reader, can only agree that it’s quite amazing. Instead want to tell you about Sodebo, the company that has sponsored Coville for the last 18 years. Sodebo is a French company that makes ready-to-eat foods such as frozen pizza, burgers, that sort of thing. It was founded in 1973 by a husband and wife team who, in the 90s when the company was making mostly just frozen pizza, decided that they wanted to grow their business by getting into the sailing space.  Sailing is big in France and the founders wanted to capitalize on that interest.
They put out a notice that they were going to sponsor a sailor and asked for people to send their in resume for consideration. I don’t know how many people applied but they settled on Thomas Coville. He was young, talented, a great communicator and (I am sure that this played a part in his selection) he was extremely good looking. A perfect package to wrap your brand around.
The first race Coville won for his new sponsor was the Transat Jacques Vabre in 1999. The TJV is a double-handed race that goes from France to variously the Caribbean or points in South America. This was all in preparation for the 2000/01 Vendée Globe in which Coville came 6th.
I won’t list all of his accomplishments other than to say that he was aboard Groupama when they won the Volvo Ocean Race, he was the first sailor to cover more than 700 nautical miles in a 24-hour period, and he currently holds the fastest solo, non-stop circumnavigation. That lap of the planet was in an incredible 49 days, 3 hours, 7 minutes and 38 seconds.
You have to wonder what’s next and if any of these very impressive records can be beaten. He is 49 years old and as most of us know, the bones start to creak a little once the big 50 is in the rearview mirror.  But then his biggest record setting rival, Francis Joyon, is 61 and still cranking so who knows? And what of that small frozen pizza company, the one whose founders decided to hitch their wagon to sailing? It’s now a massive multi-million dollar company.
Isn’t it about time some American companies saw the value in sailing and the value in the talent of some of our sailors and hitched up their wagon? I think so. Sailing is no longer a sport for the one percenters. It’s a global marketing opportunity that can reach the masses. So what about it, Jimmy Dean?
– Brian Hancock

right where we want them