too much is just right 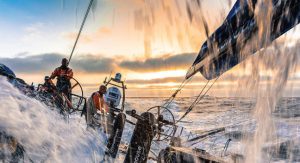 Wholescale change is afoot in the Volvo Ocean Race following Mark Turner’s appointment as CEO almost a year ago. The new measures, set to be implemented for the race after next are colossal, way, way more than merely adopting a new boat.
The latest initiatives for ‘Volvo Ocean Race – the next decade’ are intended to increase the value of the event to all its stakeholders: sailors purely focussed on winning, team owners, sponsors and partners, host cities, as well of course as the race’s owners, Volvo Group and the Volvo Car Group.
New offshore boat
Following debate about whether the replacement for the one-design VO65 would be monohull or multihull, the former was finally confirmed. After a lengthy tender process French naval architect Guillaume Verdier, one half of the partnership responsible for the last two Vendée Globe winners, won the contract to design the new boat. Yet to be named, this will be a foil-assisted, partially flying, canting-keel monohull. Likely to have more keel, more rig and more structure than an Imoca 60, the new boat’s design is aimed purely at the Volvo Ocean Race.
However… by coincidence Turner says the platform has ended up being much the same size as an Imoca: ‘Given how foiling technology is evolving, bigger is no longer necessarily better.’
So they decided to make it possible to transform the new boat into a Vendée Globe-compliant Imoca 60 if required. But Turner stresses this was decidedly a secondary feature – the brief was ‘the right boat for the Volvo Ocean Race’.
The new design will have a Volvo Ocean Race lifespan of six years. It will have five to seven crew, plus onboard reporter. Incentivising the recruitment of female and youth sailors will continue.
Read on.

woody in a week

the next superyacht trend?