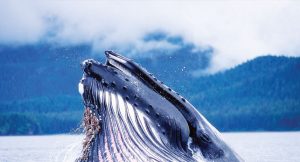 A key element of The Schmidt Family Foundation strategy is to provide the resources for grantees to be successful at what they do. At 11th Hour Racing we leverage the platform of sport to broaden the connections between grantees, sponsorship and ambassadors, and we broadcast these inspiring stories to a larger, more diverse audience,’ says Todd McGuire, programme director of Newport based 11th Hour Racing.
In the summer of 2016 11th Hour Racing grantee Rozalia Project sailed research vessel American Promise up the Hudson River to conduct the Hudson River Microfibre Sampling Expedition. This famous stretch of fresh and brackish water was a perfect laboratory: a giant river running through one of the most densely populated regions in the world.
Onboard American Promise particles were captured through ‘grab samples’, water samples passed through vacuum filters. Fibres from manmade sources, plastic and non-plastic, such as cotton textiles, were painstakingly counted under a microscope to measure microfibre contamination up and down the river – from the remote alpine regions to New York Harbour. These fibres easily enter the food chain and can ultimately end up on our plates.
Rozalia Project’s team knew from previous research that the logical source of the pollution was grey water from millions of washing machines throughout the Hudson River estuary. ‘We knew that washing machine effluent is a big source,’ says Rozalia Project’s director Rachael Miller, ‘but our research also pointed to air pollution, possibly from dryers and garment abrasion.’
Miller is also very careful to emphasise the context of this research. ‘This is more than just food wrappers,’ she says . ‘This fundamentally is less obvious and more complex. – Read on.

Lister in the Sun