Brian Hancock opines on records, good ones, great ones, indifferent ones. 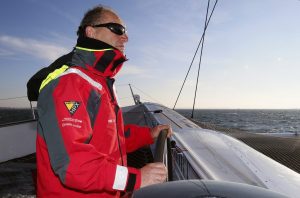 Before I launch into today’s blog let me correct a mistake I made in the  piece I wrote yesterday about Mighty Merloe and the Transpac. In the blog I mentioned that Phaedo3 might well have beaten Mighty Merloe had Crew Boss Brian Thompson not been sidelined with an injury. Brian is an incredibly talented sailor and they may indeed have won, but they didn’t. I then went on to state that Brian Thompson would have to wait to add Transpac Record Holder to his resume.
Well I was wrong. Pete Melvin from Melvin and Morelli Design and Engineering kindly pointed out that Brian was one of the crew on Steve Fossett’s Lakota, an ORMA 60 trimaran that set a new Transpac race and outright course World Record in 1995. I stand corrected and wonder, is there anything Brian hasn’t won?
There were two major sailing related happenings overnight. One I am having a hard time mustering the energy to get excited about and the other is simply awesome and stunning. Comanche set a new monohull record in the Transpac finishing yesterday in a time of 5 days, 1 hour, 55 minutes and 26 seconds. Why am I not excited about this? I don’t know. I have absolutely nothing against skipper Ken Read and the boat and crew but it’s just such a yawn. They came in just under a day after a boat almost half their size set the multihull record with half the number of crew on board. Yes I was excited about Mighty Merloe. Let me just acknowledge Comanche’s record and congratulate the crew.
Now let me tell you about the other record that was set and you may get some idea of why I am not gushing about Comanche. French sailor Francis Joyon smashed his own singlehanded transatlantic record sailing from Sandy Hook, New Jersey to Lizard Point on the west coast of England. I guess smashed may be a bit of an exaggeration.
He knocked 49 minutes off the existing record, his record, to finish in a time of 5 days, 2 hours and 7 minutes. Just think about this. One person, alone, on a 100-foot trimaran, ripped it up across the Atlantic making is seem almost effortless setting a new world record along the way. Now that is newsworthy. And best yet he was not trying to set a record. If he was he would have waited until a perfect weather window occurred. No, he simply wanted to beat the Cruise Liner Queen Mary 2 and took off at the same time as the QM2 left New York. The Queen Mary 2, by the way, is still out there and not expected to arrive in England until Thursday morning.
I dunno. I have taken some heat in the past for calling Comanche an unimaginative, slab sided design so I am not going to say anything this time…:)  I appreciate that people like Jim Clark pour money into sailing and I am very happy that he does. His money keeps many in the industry employed. But seriously, Joyon, alone, on a boat that big, without any fanfare romps across the pond as if he was out for an afternoon cruise. Now that is simply spectacular, at least I think it is.
How about you?

now it gets interesting