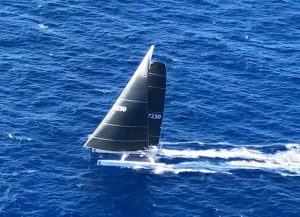 The America’s Cup may be over but since the last race on the Great Sound there has been some thrilling sailing in other parts of the world as two long standing ocean race records tumble.  On Monday evening the Shelter Island based yacht Prospector knocked more than two hours off the existing course record of the Marblehead to Halifax Race.
Meanwhile on the opposite side of the world Mighty Merloe rocketed into Honolulu harbor to break the Transpac multihull record.
The Halifax Race record was set just two years ago but the Transpac multihull record has stood for two decades. In 1997 the 86-foot catamaran Commodore Explorer covered the course in 5 days and 9 hours; Mighty Merloe knocked more than a full day off the record covering the course in 4 Days, 6 Hours, 33 Minutes and 30 Seconds.
The Halifax Race started in near perfect conditions right outside my back door here in Marblehead and the near perfect condition got even better once the yachts sailed further out into the Gulf of Maine and they stayed that way all the way to the finish in Nova Scotia.
The good conditions and the speed of the boat took Prospector’s owners, Paul McDowell, David Siwicki and Larry Landry by surprise. “We didn’t know until we crossed the finish line this evening that we had broken the record,” Landry said seemingly a bit surprised at what they had accomplished.
There was also perhaps some surprise in Mighty Merloe’s stunning win in Hawaii only because they were racing against two extremely well tricked out trimarans both ten feet longer than them. Mighty Merloe is an ORMA 60 trimaran. Her closest rivals, Phaedo3 and Maserati, are both MOD 70 trimarans, but Mighty Merloe had one distinct and unparalleled advantage and that came in the form of the crack french sailor Loïck Peyron.
Peyron is perhaps the most experienced multihull sailor in the world and he along with fellow Frenchman Jacques Vincent proved to be a formidable force and that’s not taking anything away from the rest of the very experienced and talented crew.
The second boat in to Honolulu was Phaedo3 skippered by Lloyd Thornburg and they were followed soon thereafter by Giovanni Soldini on Maserati. Phaedo3 may well have won the race had they not lost their key ingredient, top sailor Brian Thompson who was injured and hospitalized shortly before the race started. Thompson has led Phaedo3 to numerous race victories and set a number of records.
– Brian Hancock. Photo by Lolo Seabiscuit.

bunny and the whalers