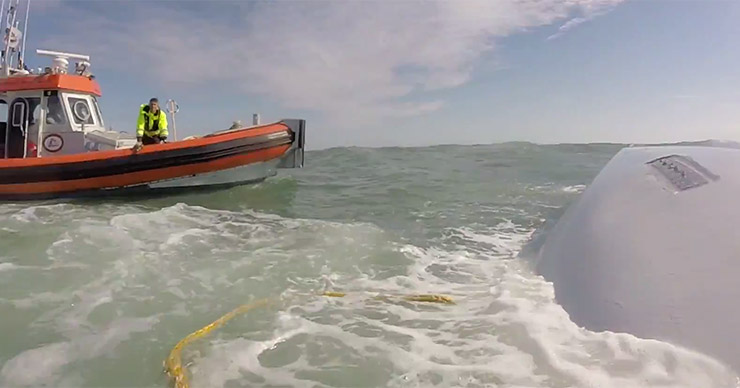 An all-night search for a missing crewmember from the Breskens (NED) flagged Capella was called off this morning after more than 24 hours of searching in the cold North Sea near Zeebrugge, Belgium.  The unnamed 18-year old’s likely death brings the total to 3 dead from the latest keel kill, including the boat’s designer Frans Maas and Hall Spars’ Freddy Franssens, with three rescued and now recovering from hypothermia.  Our thoughts go out to the families of the lost sailors, and to the entire, ultra-tight-knit sailing community in tiny Breskens.  Catherine Carter offers a view from one of many who Dick touched with his encyclopedic knowledge and positive attitude:

“I just spoke with my father, Dick Carter, who’s very much saddened by the news of Frans’ passing and asked me to convey his heartfelt condolences to Frans’ and Freddy’s family and friends. He knows that the Breskens sailing community is a close one, and that this must be a heavy blow for them. My father said, “I owe an enormous debt to Frans, because he gave me, a beginning designer, absolute confidence that it was no big deal to build a boat, in this case, RABBIT, my first design. Frans had already built TONNERRE DE BRESKENS for Piet Vroon. I really liked TONNERRE, and so whenever I was asked a question about RABBIT’s build relating to something I wasn’t familiar with, I’d say, ‘do it like TONNERRE!’ Frans was an integral part of my design career, as he went on to build TINA and her sister ships, plus RABBIT II, RED ROOSTER and others. Frans had been building boats for Ted Hood for years, which is how I found out about the Maas yard in the first place. Frans himself was a highly knowledgeable builder, designer and offshore sailor, intelligent, modest and dedicated, who transformed the yard owned by his father, which had built fishing boats, into a yard building state-of-the-art offshore racer-cruisers. Frans had assembled a team of young, enthusiastic, specialized and highly skilled workers. It was an absolute pleasure to work with him. Whenever I wanted to make any small design adjustments, his yard was able to do so on the spot. I’m grateful that I had the opportunity to speak with Frans on the phone this past May, after fifty years or so had passed since the time of our working together. He was a great man.”

Dutch SA’er Arthur Peltzer knows the boat and Maas well, and from his info, Capella’s capsize may be different from what we’ve seen from some production race boats over the past few years.

I can assure you Frans Maas never ever saved weight on keel structures, he lived and sailed on quite a rough part of the North Sea and build and designed all his boats to deal with that, his build quality could match yards like Nautor’s Swan. This boat has raced 10.000’s of miles in offshore races like the Fastnet in much heavier conditions than on the day of the accident without any problem. Although the boat was more than 20 years old it was maintained meticulously, every year it would come out of the shed like it was new, I would not have hesitated for one second to join Frans and his boat for any offshore trip.

Share your thoughts of the deceased sailors in the thread.  Full story here with rescue video here.

don't judge a book by its cover