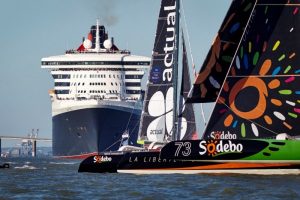 Here is a story that was about to go by unnoticed unless someone wrote about it so I figured that scribe might as well be me. On June 25 a very unlikely race set off from Saint Nazaire on the west coast of France bound for a finish under the Verrazano Narrows bridge in New York harbor. It’s a race to celebrate a 100 years of friendship between France and the United States, but here is the kicker. The race is between the luxury cruise ship, the Queen Mary 2 and four Ultime trimarans.
The trimarans are the four fastest in the world skippered by four of the most well known and well respected sailors, but none of them are a match for the mighty Queen Mary 2. Five days into the race the ship is trouncing the trimarans. As of this morning, June 30, the Queen Mary 2 is just under 800 miles ahead of the closest sailboat, the 100-foot Macif skippered by Vendée Globe winner Francois Gabart, and has only 400-odd miles to go to the finish.
The QM2 was steaming at a very respectable 20 knots while all four trimarans were flopping around in no breeze barely managing 7 knots. They are in a tight bunch just outside an ice exclusion zone southeast of Newfoundland. Trailing Macif by 45 miles is Francis Joyon on IDEC Sport and 10 miles astern of IDEC is Tomas Coville on Sodebo. Bringing up the rear is Yves Le Blevec on Actual.
Granted this is a stunt and a way to get some publicity for both the ship and the yachts, but to be honest when I first heard about this race I thought that there was a good chance that the trimarans would prevail. These huge yachts can routinely average 20 knots and are often pushing 40 knots of boat speed, but there is no accounting for flat calms. They started off ok in a decent breeze but now they are between weather systems and going nowhere slowly while the captain of the QM2 keeps his foot flat on the gas oblivious to the wind conditions.
Nope this does prove that it was the right decision to move from sail to power back in the day and this scorching soon-to-be win by the Queen Mary 2 further underlines that point. – Brian Hancok.

from the hook playing field