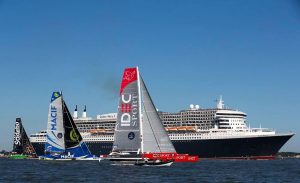 Just as the America’s Cup comes to a close, another spectacular multihull race has begun. Four “Ultime” category trimarans have departed Europe for a mid-summer Transatlantic race to New York, because, well, ‘Merica.
In homage to when the yanks came to the aid of the frogs in WWI in 1917 – and to recognize our nation’s friendship and solidarity – comes the centennial transat known as “The Bridge“. From the bridge of Brittany’s Saint-Nazaire to the Verrazano Bridge in New York, the four crewed Ultime’s are up against a formidable opponent in the Queen Mary 2; the Atlantic’s last remaining ocean liner. While the sailboat vs. ocean liner concept is more than a bit hoakie, watching the battle between this quartet of huge tri’s is anything but.
After a day in light and inconsistent breeze, the fleet is now on the back side of a low, reaching towards North America with pace. Francis Joyon and IDEC Sport currently lead from Francois Gabart and MACIF, having swapped the lead back and forth, and currently separated by a just a couple of miles on the tracker.
Thomas Coville and SODEBO continue to slip behind, 85 miles back, with fourth-place Yves Le Blévec’s Actual a further 120 back. It’s still very early, and the route to the Big Apple is a complicated one in between a series of lows, so we’re grabbing the popcorn now.
For the record, the Queen Mary 2 has stormed to an impressive early lead with her reliable daily VMG runs of 560+ down the rhumb line. – Ronnie Simpson.
Website
Tracker

a majority of one