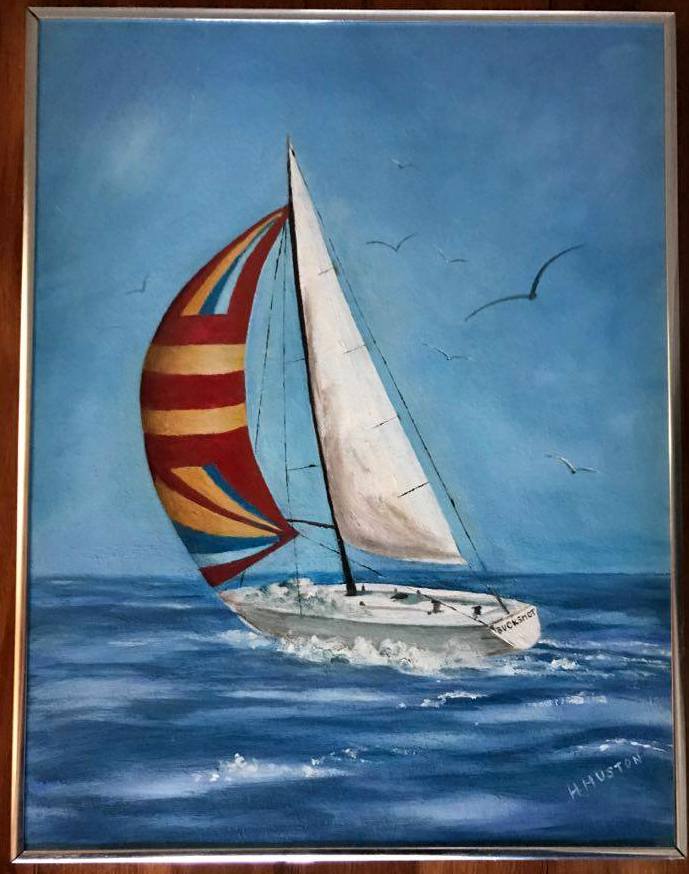 Sad to say that Doug Peterson, noted designer, passed away today. As a kid, I was fascinated with Ganbare, the boat that changed big boat sailing and set the tone for the IOR for almost a decade.
Years later, when I wandered into Carl Eichenlaub’s yard to talk about Lightnings, there staring me in the face was a brand new Peterson design – Forte – his first breakthrough fractional rig, which was being built for the 1980 SORC.
While there had been other fractional rigged IOR boats by this time, Peterson was credited with really accelerating the growth curve of that aspect of the IOR rule. Forte was very successful that year in the SORC.
I got to know Doug a bit through Carl and that boat, and others over the years. The painting below is my late grandfather Huston’s interpretation of Forte, which had appeared on the cover of a SoCal sailing magazine called “Waterfront”.
Doug designed a lot really cool race winning boats – Stinger – Louisiana Crude and the line of Serendipity 43’s that came out of that design (and I actually ended up selling those boats for Serendipity), Checkmate (which last I looked a few weeks ago was for sale, and is in immaculate condition) – and many others.
In the ’92 Cup, Doug was one of the principle designers for America 3, and then in ’95 went to work for Team New Zealand, of course they took the Cup from SDYC. The day the trophy was awarded to RNZYS, my then girlfriend and I wandered out to the dock at SDYC to see the J Boat Endeavor, which was sort of the TNZ mothership. The crew was gathering on the boat.
We were chatting with Crusty, who I had gotten to know when he came to Balboa YC and won the Governor’s Cup, and by then had become part of TNZ. The last two guys to come to the boat, holding the Cup, were Coutts and Doug. I threw them the last dock line as they departed SDYC.
It is then somewhat really ironic to me that Doug died today, the day the Kiwis win the Cup back again. It is exactly the sort of karma I would have expected from him.
Thanks for all you did for the sport Doug, and giving us some awesome boats on which to sail. – Peter Huston.
Thread here.

well, at least one artemis foils