the pulse 600 saved my life

From the forum…
Well, the new trimaran by Corsair saved my sailing life anyway… 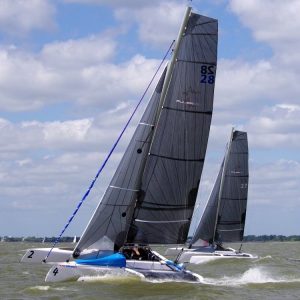 In short, I found myself without a fleet in my early 40’s asking the question “what’s next?”.  I learned to sail at age 7.  I won my first national championship at 11, was a four year letter at USMMA with a few national titles in hand by graduation in 1997.  After college, like many others, I continued to sail lasers and V15s though many of my fellow collegiate sailing competitors went into full time Olympic campaigns.  I qualified and competed in the Olympic Trials in 2000, 2004 & 2008 to showcase how much better the full time campaigners became over the years. For my personal fleet, I traded usage of an S525 for a J22 along the way and raced it for 13 years.  I ended up with a J30 that my wife and I enjoyed overnight cruising on but now with three kids, two boys 9 & 6 and a girl now 3, the contentment and solice the J30 brought my wife and I does not quite do it for all of us.
One day about three years ago, the owner of the J22 Green Flash called requesting his boat back.  We originally traded boats because we were both moving simultaneously, I left my boat where it was in Port Arthur for him to use, he left the J22 in Houston for me to use.  Sadly, I delivered Green Flash back to Port Arthor and the two of us decided I would donate the S525 along with some cash from him to the sea scouts.
I looked around for a new fleet and was not pleased with the state of the sailing world.  It was the new age of the handy sport boat with new fleets popping up every six months.  I went to a regatta that had 8 fleets of sport boats under 30 feet none of which had more than 6 boats and I could only think “this could be an awesome regatta with 50 boats on the line but instead it is a whole bunch of mini-regattas going on simultaneously, yipee, what is wrong with this picture?”.    I had no intention on waiting for one fleet to take over the others which may take years and didn’t care to buy a boat that propaganda dictated “that’s where the competition is going.”
Watching the sport get stretched so thin was depressing and, frankly, I just wanted to go sailing again, have fun and go fast.  After much research, I bought the Corsair Pulse 600 last spring and can’t say enough good things about this boat.  I have raced it with my family of five, single handed and with an experienced crew or two .  I have hit 25 knots with three experienced crew and I have returned to port at 19 knots with my 6 year old attempting to do flips on the windward trampoline.  One Friday afternoon, I left the office, splashed the boat left the dock at 2:45, went sailing came back put the boat away and left for home at 5:07 after logging 21 miles of blasting around Galveston Bay in my button down shirt and slacks.  For the first time in a long time, I am excited about just going out for a sail.
Read on.

par for the course