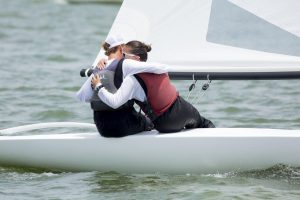 Eddie and Kate Cox won an epic shootout to take home the MC National Championship title. It is the first MC Nationals win for the sibling duo from White Bear Yacht Club. They won three out of seven races at the event hosted by Rush Creek Yacht Club in Texas.
The title came down to the final race. Leading up to the final day’s one scheduled race, Cox was close at the heels of regatta leader Mark Tesar. It was Cox vs Tesar in the final shootout. Cox set up on the starting line immediately to leeward of Tesar.
Cox’s boat speed put his bow out, and just after the cannon the race was his to control. At the first windward mark he had a 30 second lead ahead of Kenny Wolfe and Virginia Hannen, the second place boat. Tesar was 18 boats back. Cox led the race wire to wire, holding off Wolfe and Tesar.
More here. This great shot thanks to gustavfoto // regattashots.com.