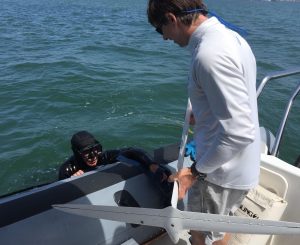 Yesterday Matt Struble dropped his front vertical and home made horizontal foil off of his new Mach2 Moth while sailing in San Diego’s South Bay. Seems that he forgot to insert the retaining pin. Amazing, actually, that he managed so sail several miles from the Coronado Yacht Club before losing the foil. Matt did manage to sail it back in without the front foil and “centerboard.” Always the engineer, Matt downloaded the GPS and speed data from his Velocitek Pro Start – and determined the Latitude and Longitude where he stopped foiling which was probably the location where the vertical departed the boat.
Armed with Fernando, the magic diver and our trusty Protector boat with it’s B&G Zeus chart plotter we headed out this morning in search of the run away foil. Per Matt’s estimated lat and lon we navigated to exactly that spot in the large expanse of South Bay. Fortunately, that location was just west of the channel in only 14 feet of water not far from R28. We dropped the anchor at the designated spot and Fernando hopped over the side.
Two minutes later Fernando came to the surface about 10 feet off our port side with a big smile and a $3000 moth foil in hand. Amazing. We were so close to the spot that we could have dropped the anchor right on it. Now that would have been a story!
Thanks to Velocitek, an excellent GPS chart plotter and Fernando, the magic diver Matt now has his foil back. Nobody thought this could be done. Maybe even us. – John Downing.