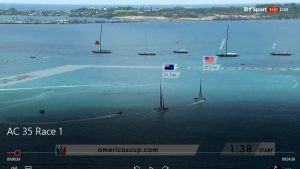 I have to admit I am a died in the wool fan of combative match racing, so much so I even umpire it when I get the chance and my initial view of the current (and immediate previous) America’s Cup is that it isn’t really right, it isn’t really a proper Americas Cup’, then I got to thinking.
The America;s Cup has always been about innovation, about pushing the boundaries of what is allowed, what is possible or even just perhaps possible.
If one remembers the rules of the last America’s Cup boats were written to make foiling, if not impossible, then pretty darn difficult. Well the Kiwis soon busted that, closely followed by everyone else.
When I grabbed this still from the Day One coverage of the America’s Cup I was reminded that it is not just NASA that has a trickle down effect or Formula 1 Motor Racing to automobiles, the America’s Cup has, along the way been at the forefront of yachting development for, well a long, long time.
These AC Cats are – no other word to describe them – phenomenal. They hit 40+ knots, fly above the water and are amazing to watch. Not much close tacking perhaps (the entire semi finals had less tacks then the last beat of the 1st race in !983) but for ‘wow factor’? Well, I have even had non-sailors ask me about how they do it.
In their day, the J-Class were responsible for so many innovations or developments particularly in what sailmakers would call “The Engine Above the Deck”.
Rigs went from single spreader to multi spreaders, rigs that were so much higher and more efficient with Bermudan Rigs (and I suppose we go full circle by having this America’s Cup in Bermuda), a large a change from the old gaff rigs to the new rig as wings are to soft sails.
Those sails were in grooves or tracks up the mast instead of secured by hoops as with gaff rigs increasing aerodynamically, the efficiency. Aluminium made its appearance, as lighter than wood as carbon is now lighter than ally and even a form of wing mast made its appearance on what many people consider the greatest J-Class of all, Ranger.
Rod rigging – common place on modern race boat with now steel being replaced by carbon leading to the modern E6 rigging on the highest end boats and a rig where sails, sails like genoas and spinnakers (both or which owe their developments to the J-Class era, and sails that were increasingly controlled by geared winches instead of a cast of thousands pulling on block and tackles.
Nav instruments which most racers wouldn’t dream of sailing with these days
In so many ways the J-Class were the foiling cats of their day.
In between then and now the problem of getting weight (and righting moment) low was well and truly achieved by Australia 2 in 1983.
In 1987, after every 12 Metre before her had been aluminium the New Zealand plastic (cheater as Dennis Conner accused her of being) boat nearly carried all before her and the AC Class monohulls which were ultimately developed to the Nth degree, along the way giving us moulded sails and  showed what could be a achieved in a performance monohull while still providing close racing.
Of course between the 12 metres and AC Class we had the NZ ‘Big Boat Challenge” which very clearly showed the performance difference between a monohull and a multi. And of course the full on wing mast made its first appearance in this match.
The move to multihulls with the DOGfight produced a boat with a larger wing than a Boeing 747.
Like it or lump it, in many ways these awesome ( much overused word but totally appropriate here) 50 foot catamarans (OK for the pedantic they are just under 50 feet) are no more than a continuation of the design competition that the America’s Cup always has been.
Let’s hope it continues to be so as we mere ‘mortals’ who still, in the main sail lead mines ultimately benefit. My own boat has instruments, rig, sails and winches, all of which saw the start of their development with the America’s Cup.
Not everyone will agree with me, I’m not sure I agree with myself but development costs money, a need or desire to win drives development.
Thankfully the America’s Cup has had no shortage of people with money who want or wanted to win, so whether we love or hate the current format, we should all be grateful for sailing’s development engine that is the America’s Cup.
– Shanghai Sailor

an open letter to larry