Charles Caudrelier took a surprise podium in the last Volvo Ocean Race with Dongfeng (a surprise to some). We get some insight here, thanks to the men of Seahorse. 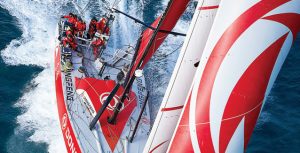 Seahorse: Let’s talk a little about your experiences in the last race in 2014/15. You went into the Dongfeng Chinese-French programme off the back of winning the previous edition with Franck Cammas on Groupama 70. How much of that VO70 project could you take into a new campaign in smaller, less powerful VO65 one-designs?
Charles Caudrelier: Groupama was a winning team so of course you learn a lot in a programme like that. No team is ever perfect, though, so I tried to bring all the positive aspects from that campaign and change what I saw as weaknesses. But I obviously cannot do exactly the same – I don’t have the same sailors or the same project; now the boat is a one-design too so I try to find sailors who come from onedesign or dinghy backgrounds because it is all about how to make the boat go fast rather than how to design and mode it.
SH: In certain conditions you were definitely faster last time…
CC: We were strong at the beginning downwind and in light air. I think we had a different way of sailing and trimming sails initially, but afterwards everybody else started using our approach. At the end of the race we were actually not as fast, relatively, but people still thought of us as quick which was good for us! For sure, in light conditions we were always quite good, but equally in strong winds and above a certain boat speed we were a bit slower than some others.
The interesting thing of course is that at the time many people thought it was the boat making the difference, because when it is one-design people always blame the boat and not the crew. For us, it was about the way we trimmed the sails and to a lesser extent the boat itself.
SH: But were there conditions when you felt other boats did perform better…
Read on.