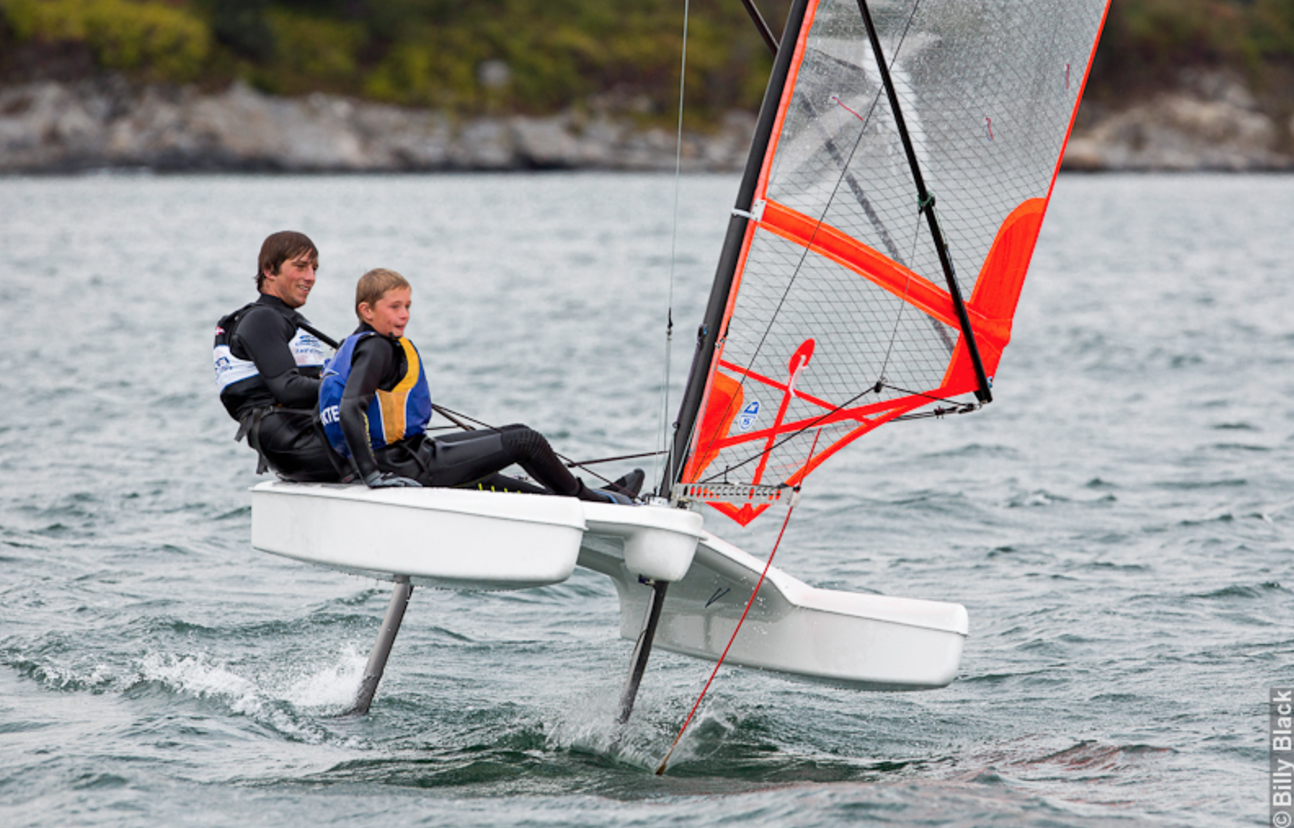 SA’er ‘Ezra’ gives us another disinterested review of the little foiler we dig so much.  Will it live up to the hype? Let’s find out.  Photo not of the reviewer…

I sailed Dave’s demo boat at the Wickford regatta this Saturday and had a blast. Conditions were SSE 15-18 gusting occasionally to 20 with a pretty good ebb against the wind, so some decent chop. The plan was to do some “match racing” with Dave but unfortunately in launching he dropped his rudder and it sank to the bottom (I guess he had forgotten to rig the rudder downhaul -apparently he had a late night the day before- which would have kept it in), so I headed out to the course solo. My impressions:
The boat is really easy to rig. We had to put the boat I sailed together, which consisted of sliding the 3 piece mast together, pinning the wishbones to the spreaders and sliding the mast into the step. Tip the boat on its side, insert foils from the bottom, attach the wand arm to the main foil, tip the boat back up (foils are held in the retracted position by cool little keepers on the rudder head and mast pod), rig the mainsheet and hoist the sail. Because the rig is so bendy, it is really easy to hoist the main even though it has a lot of luff curve with the stays released. Rig Cunningham and outhaul, slide the dolly under and you are good to go. Town Beach in Wickford is shallow for a good ways out, so I put about a foot of rudder down and sailed out to deep water, where I then dropped the main foil and the rudder and went on my way.
It was about a 2 mile beat out to the course. I did a commination of semi foiling and foiling to get out there. For such a short boat, it handled the chop well, although I had my ride height probably set too low so even when foiling I was punching through some waves. What really go me is how much bigger the boat feels than it actually is-the main foil is always working for you, even when “displacing”. Once I got up to the course area I had some great rips with a bunch of down-speed sailing in between (I am NOT in very good hiking shape right now and my hip flexors were screaming!). The boat is really very manageable when down speed-compared to my time sailing I 14s the boat is very easy in the between races milling around mode, even in good breeze and chop. Down speed tacks were the most challenging-it was easy to miss stays, but pushing the main out to leeward and backing the tiller would get you going quickly. I had 3 “near” crashes, the first 2 were nosedives into waves that happened just as I was building speed to foil-probably because I bore off to a reach too aggressively-in both cases I buried the bows to well past the mast pod (in fact I was sitting pretty far aft and was under water to my chest!), but I just held on and amazingly the boat just popped back up and kept going. The third ended my day-I was going nearly DDW, in the middle of the boat on my knees when a puff hit and the boat came up on the foils and promptly heeled to windward, pitching me off. I didn’t want to get separated, so I held on to the tiller extension, hoping the boat would flip or round up. It did stop, but not before I cracked the tiller. Dave jumped in, jury rigged the tiller and gave us a show of how to sail the boat properly!
The boat I sailed had literally been put together the day before, and the only breakdowns I had (apart from the tiller, which was serious user error, but which Dave says he is going to beef up) was a knot pulling through on one of the shrouds which I fixed on the water and one of the wishbones pulled out of its end fitting due to not enough plexus at the bond surface, which we electrical taped to finish the day.
I think the thing that struck me most about the experience and what I think sets the UFO apart is that the boat is so manageable. Yes it is demanding and physical when you are ripping, but when I got tired, I never felt a concern about being able to get back to the beach.
Tags:dave ClarkdinghyFoilingUFO
ScotJune 16, 2017
Leave a reply