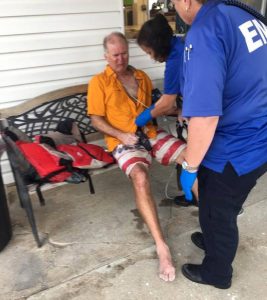 We went fishing out of eagle point marina this morning. The wind was blowing like crazy and it was way to rough to go but everyone wanted to, so off we went. Headed south towards Hannah’s reef. About half way there I see something in the water, first thought was a pelican. Then it waved at me! I made a hard turn to starboard and we pulled him out quickly. He was holding onto one of the white PVC pipes that marks reefs and shallow spots.
We had him sit on a ice chest and gave him water. We called his wife as soon as we had him in the boat. He said they were on a sail boat yesterday and a line had wrapped itself in the prop. One of the guys went overboard to free the line and somehow they both ended up in the bay. With the way the wind was blowing their sail boat left them in a hurry. He said his friend died in his arms overnight. I don’t know at what point they became separated. He said he had been in the water since yesterday afternoon. I am guessing he had been in the water either drifting or holding onto the pipe for 15-16 hours. He did have a life jacket on!
He was pretty cut up from barnacles and oyster shells. He had a pretty good sized scrape on top of his head. I honestly don’t know how he held on to that pole for that long. I am guessing that is when he was separated from his friend. I called the coast guard and met with them. They asked if I could take him to the dock so they could continue to search for his friend. We booked it back to eagle point, he puked a good bit of the ride back. Probably from all the salt water he had swallowed. His wife showed up at the marina and so did the wife and child of his friend. An ambulance showed up and took over.
I will never forget this mans eyes when we pulled him in the boat!
On the way back to the ramp we passed a 6-7 ft alligator swimming about 300yds from where this all happened. Lifted from FB. – ed