When did you ever think it was possible to have elected such a spiteful, heartless son of a bitch like (so-called) Predisent Twitler? There hasn’t been an environmental protection that the orange menace hasn’t tried to overturn and his latest is nothing other than a ‘fuck you’ to the earth’s precious whales and turtles.
And for what? Just so that he can make it crystal clear that he doesn’t give a fuck about the environment or the animals who live in it? Other than the retarded right, the world watches in embarrassment and horror as this vindictive prick shits on everything good and just and fair. 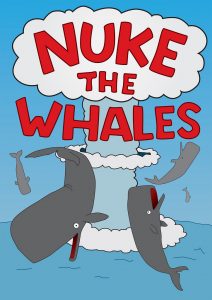 It hasn’t been a good week for America’s endangered species. The Trump administration has been taking aim at protections for some of the country’s most vulnerable creatures: Last week, it was the imperiled sage grouse; this week, it’s endangered whales and sea turtles off the Pacific Coast.

The National Oceanic and Atmospheric Administration’s fisheries division announced on Monday that it is tossing out a pending rule meant to protect marine mammals and sea turtles, including several endangered species, from swordfishing gill nets off the West Coast.

Environmental experts are calling the move a declaration of “war” by the Trump administration against threatened marine life.

“The Trump administration has declared war on whales, dolphins and turtles off the coast of California,” Todd Steiner, director of the California-based Turtle Island Restoration Network, told the Los Angeles Times. “This determination will only lead to more potential litigation and legislation involving this fishery. It’s not a good sign.” Read on.

Corona-cinema – the best drone takes from the Volvo Ocean Race