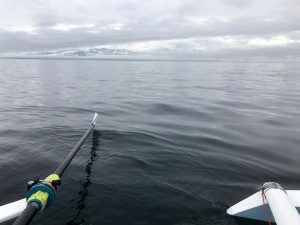 Yesterday saw the 5 am start to the first (qualifying) stage of this year’s R2AK, from Port Townsend to Victoria, on Vancouver Island. This 42 mile stage requires crossing the quite temperamental street of Juan de Fuca, which can toss up serious conditions quite abruptly.
The forecast called for light winds (7-10 knots) with a favorable tide in the morning, and a full westerly blast of 20 kn with gust of 30 kn and an unfavorably switched tide after 1 pm. That was enough to persuade a few of the slower but wiser vessels to postpone their crossing to today.
The rest of fleet rushed out in what turned out to be essentially no wind. The fastest pure rowers, pedalers and paddlers were setting the pace, leaving even the most tricked out multihulls behind, and finishing after 6 1/2 hours. It is worth noting that some of those human powered vessels are staffed by actual olympic level athletes.
For myself, I made good progress rowing Kairos from windline to windline, crossing the street uneventfully, and approaching the southern coast line of Vancouver Island around 12.30 pm. When the wind started picking up I was less than a mile from the critical channel marker into Victoria Harbour. Beating into the quickly increasing wind and breakers I stopped making progress, at which point, if not earlier, I should have turned immediately and run down the coast to the first available shelter. Instead I tried battling the conditions for a while, slaloming around the plentiful floating logs. All together foolish, given the circumstances, and particularly given the available 36 hour window to make the qualification.
I ended up in McNeill Bay, 4 miles east of Victoria, together with the R2AK experienced Bunny Whaler, which had read the signs much better and headed there at the first signs of the impending mayhem. Tied up at a little jetski dock together, we followed the live wind recordings on Trial Islands just outside our bay which showed peaks of 45 knots. By then we could also see that more than half of the 59 starters had gotten caught in the blow, with no chance of making the entrance into Victoria. Most were blown further eastward and went into the lee of islands, a few boats kept battling all night in the street until the tide turned, while R2AK legend Roger Mann had to beach his custom trimaran nearby after running over a log.
After a long and restful night I made it into the Victoria public harbour by 10 am, with a lot of the remaining fleet trickling in shortly after. Lessons learned include that little but solid Kairos can handle a lot, and that, like many good vessels, Kairos will easily outlast its skipper.
Now, everyone is looking forward to tonight’s party, before the 710 mile race starts in seriousness tomorrow at noon.
Cheers,
Joachim Roesler

been there, don’t want to do that