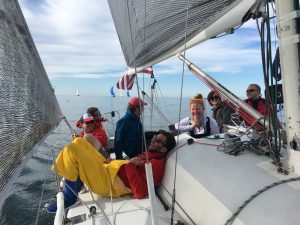 We love this report on the Figawi from the NM 30 Wampum. Enjoy.
The morning of “the big day” the crew was running late, and after Friday’s debacles on the feeder race course I honestly didn’t care if we started on time, just that we got to Nantucket without any mishaps. Catching the very last launch to leave the HYC dock that morning might have stressed out some crews, but we were surprisingly not worried. Coming out of the harbor and witnessing 200 boats eagerly awaiting their time to cross the same starting line is always a sight to be seen. They gave us one of the longer courses, at 25.6 nm so this meant we had a slightly later start around 10:58.
We were very lucky to have an awesomely talented crew of 9; including 4 Catamounts, and an Irishman. Adam Ceely was calling tactics/wind and he did a phenomenal job throughout the nearly 7 hours of racing.Once again it was a predominantly downwind race. We started with the 155% genoa up, less than one boat length from Lyric who was OCS and had to return to the line to restart. We gybed as soon as we had a lane of clear air, and in the process we happened to squat on Dark n Stormy’s air.
They were forced to gybe back towards the West where all of the cruisers were sailing slowly wing-on-wing. We on the other hand headed wayyyyyy out to the East as the northerly breeze slowly died. Once firmly on the far left side of the leg, we did a couple gybes to avoid sailing into dead zones and did a great job of connecting the dots, linking up puffs and keeping the boat rolling. We had several close interactions with much bigger boats who started ahead of us, and were able to maneuver around them with relative confidence in the light wind.
Read on.