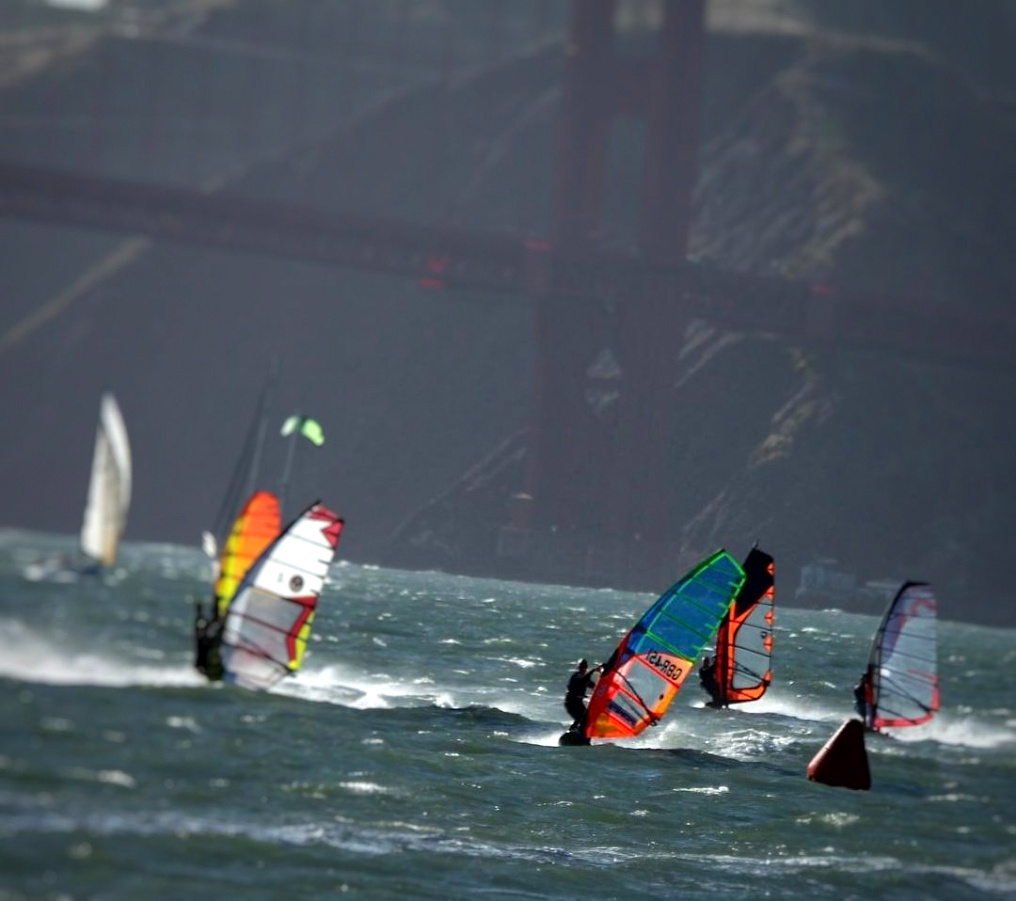 When it rains, it pours and when it blows, it blows the dogs off their chains in San Francisco.
Things started off pretty heady for the first St. Francis Yacht Club Friday night slalom race of the season on May 12th as the puffs hit 30 knots & 4-6′ breaking swell buried the 2nd downwind slalom mark, set a few hundred feet of Crissy Field. A dedicated group of wind junkies, half of which were on extra small bump and jump or wave gear, jumped at the conditions to carry on a tradition that has been going strong since the early days of windsurfing in California. Photo credit @lyrahcolvin
Downwind slalom racing, especially in a big breeze is one of the most spectacular to watch & one of the most exciting disciplines to compete in. At 1 min before the start, it’s a chaotic symphony of windsurfers jockeying for position as they scream towards the starting line set just off Anita Rock on the San Francisco city front. Like clockwork, the fleet blast across the starting line in an all-out sprint towards the 1st gybe mark, hitting speeds of 25 knots and flying across the chop all within a few feet of each.
The first to arrive quickly lay down their sails to de-power while carving around the mark. In an instant, they are back on the new gybe going deep across the troughs of breaking swell. A few get knocked down, while the rest hold it together. It’s a full obstacle course as several fleets of inbound ocean racers cross at the exact time the fleet gets ready to round mark 2.
Chaos erupts as the yachts broach in a hellish 30 knot+ westerly puff and the mark is buried in the breaking rollers coming in the San Francisco Bay. A few boards go down, just to save themselves from what would otherwise be an impending death sandwich between the fiberglass hulls. Those that emerge, do so by the skins of their teeth, threading the fine needle of control and all out balls to the wall, hold it together for your life windsurfing.
Two more gybes to go and its all over.
The fleet rips back towards the east end of Crissy Field where there’s a slight relief from the 4k flood tide ripping across the course. Even the racers on 4.5 m wave sails effortlessly carve around the mark in stiff 25 knot breeze and quickly make their way towards the last gybe mark set in an all out furry of wind and waves. Positions change as rapidly as the wind but the top racers are able to maintain control and consistency in their maneuvers around the course. 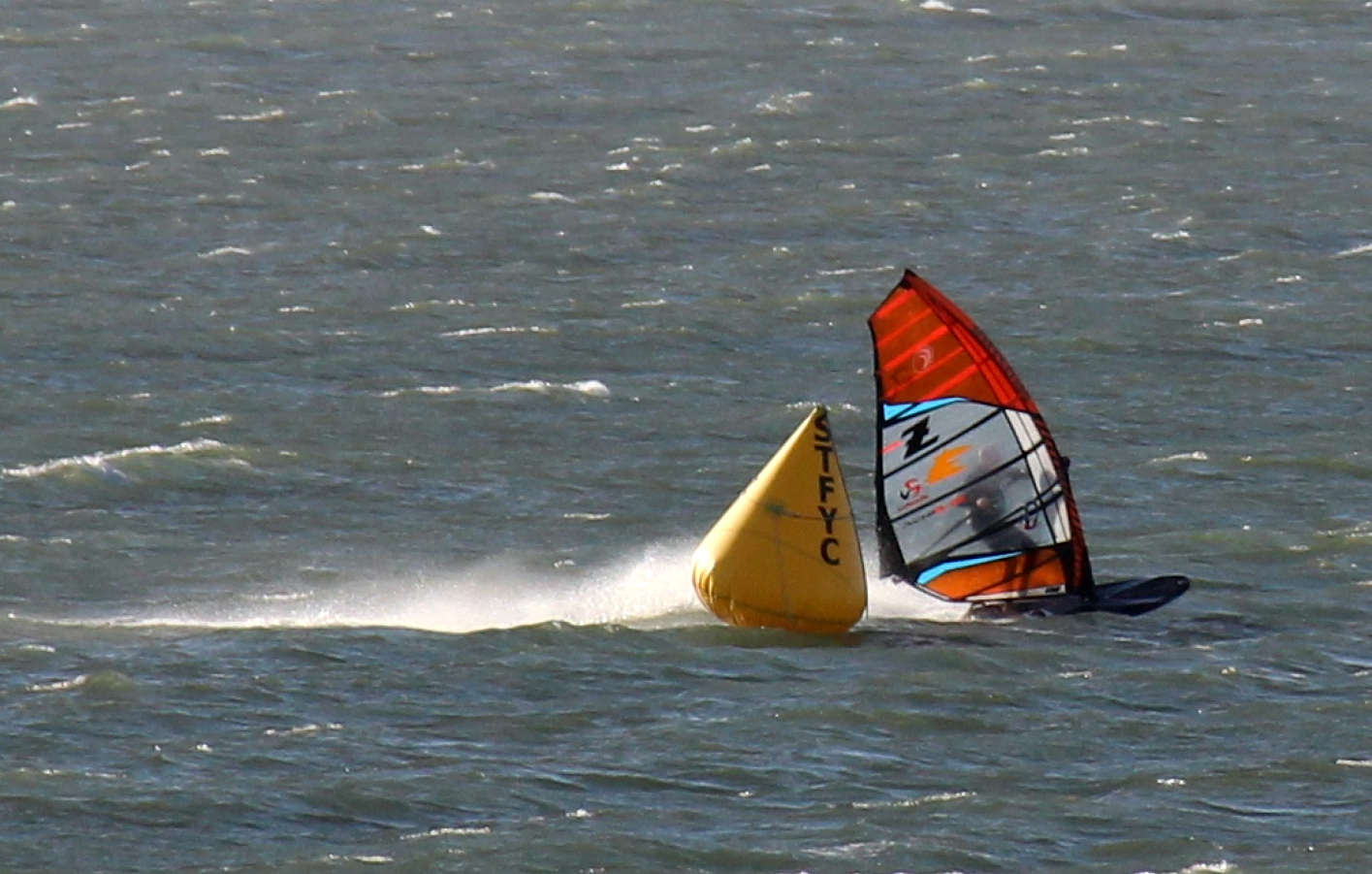 One more ‘OMFG reach’ and the 2-1/2 minute race will be over.
If you can avoid stuffing the nose of your board in the breaking swell and round the StFYC B buoy- set just in front of the club, the race is over. If not, you’ll have to watch the rest of the fleet fly by as you try to muster the energy water start to make it across the finish line in dead fucking last (DFL.)
When its all over, everyone heads back upwind for another shot at redemption.
You’re only as good as your last race and for the rest of the fleet who didn’t score a bullet, there’s victory to be had or lost once again. 4 more races are run as the breeze settles down to a reasonable 20k and the flood builds and flattens out the course. Photo credit @petergrendler.
I have the duty of race committee this evening with 2 other racers as the only way this series works is by volunteering 1 of the 4 race nights towards race management. You get to see how and why the series works by actually taking part and running it. The marks don’t set themselves, nor does the start or finish go off without the help of 4-5 person team.
By the time its over, the fleet looks like its returned from a naval battle with broken sails & twisted carbon but there’s a slight twinkle in the eyes of these wind junkies- ready to do it all over again tomorrow.
For the full report- including the Sailing Anarchy sponsored Crissy Field Slalom Series, check out the USA-4 Windsurfing blog. – Steve Bodner.

win and you’re in