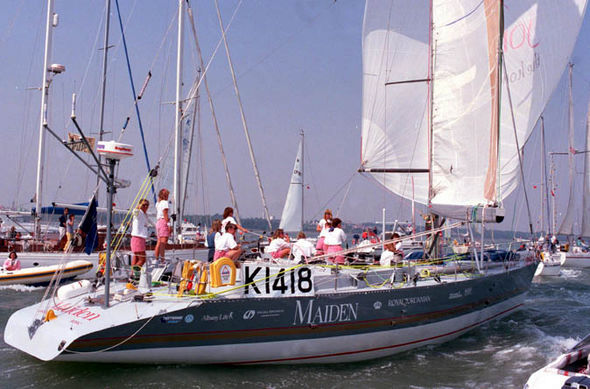 Ok, so this story is very close to my heart. I have known this boat for almost four decades. I first met her during the 81/82 Whitbread Round the World Race. It was painted in colorful horizontal stripes and for a period we sailed up the Atlantic together. I think that we were in sight of each other for about a week and it was fun to come on deck each morning and there she was. Like a friend. Back then the boat was named Disque d’Or and was skippered by the Swiss sailor Pierre Fehlman. They ended up coming fourth overall in that Whitbread; we came in ninth.

I have always believed that boats have some special magic to them. I realize that they are inanimate objects but somehow boats are able to capture our imagination and connect with us on a different level. It’s almost as if a boat has a soul and this boat was definitely one of those boats that connected on its own level. It was a funny shaped thing with a funky, almost hippie-like paint job, but it was a fast and that’s what counts in a race boat.
Fast forward eight years and the boat, now named Prestige, is left abandoned in a dockyard in Cape Town, South Africa. Cockroaches had moved into the overhead lining, there was growth on the hull, there were even weeds growing up into the hull. Despite how it looked the essence of the boat was still there; clean lines, solid construction and a little bit of magic.
That was how things were when the British sailor Tracy Edwards found it in her search for a suitable yacht for her quest to put together the first all-female crew to compete in the 89/90 Whitbread. Tracy sensed that there was something special about the boat and with funds borrowed against her house she made an offer which was accepted. The boat was shipped to England where it underwent an extensive renovation to ready it for the race. They renamed her Maiden Great Britain.
Maiden was an awesome boat and Tracy and her crew wound up coming second in their class and also won two of six individual legs of the race. I was in England when they finished in spectacular style to become the first ever all-female teams to complete the Whitbread. The reception was huge and Tracy became a household name in the UK. Sadly, though, the boat had to be sold to cover costs.
Fast forward 27 years and the boat is once again in disrepair and abandoned lying at the Eden Island Marina, on Mahé, in the Seychelles. Tracy got word that the boat was for sale and flew out to take a look. The boat was even more of a mess than it was in Cape Town but the magic was still there and using money raised through crowd funding she purchased Maiden and paid to have it shipped back to the UK where it arrived last week.
The boat was originally launched in 1979, almost four decades ago. She is a bit of an old girl  but Tracy has big plans for it. Tracy recently founded The Maiden Factor and will use the boat as a fund raising hub to raise money to help educate girls and women in the developing world. The blurb from the newly launched website reads;  “With a holistic approach we aim to change today’s world for today’s girls and to that end we aim to raise funds to engage; volunteers, individual donors, organisations, their employees and girls schools in the developed world.
During that process we can educate those who can make a difference and promote the rights of girls on the world stage through Maiden, an iconic reminder of what girls can achieve if they are allowed to realise their full potential.”  I told you that this was a special boat and I also told  you that some boats have a little more magic than others. This little girl is one such boat.  – Brian Hancock.