Broken legs, broken wheels, and great fun was had by all in the Sankt Peter-Ording Easter Regatta.  We include the full Googletrans of a regatta report comparing the regatta to a wellness spa…classic stuff.  Great photography from the event over here.
Some call it wellness, the other beach sails. It is the perfect skin peeling when six to seven wind strengths whip the fine sand over the beach and the grains like emery paper massage the face. To do this is a Kneipp cure in nature – priceless. Waddled salt water, refreshingly chilling, which invites you to linger in the sand holes, is animated to the moment when you are desperately trying to free the car from the strong paws of the prills. Of course a saunagang can not be missing. Perfectly suited for this are the dry suits, when the wind suddenly takes a holiday and becomes a thrust bandage from the yacht. And above, abundant adrenaline, when the storm gusts into a small hurricane, the beach resembles a crater landscape, and the sailing pirouettes dance in the sand.
All inclusive – this was the Easter Regatta 2017 in Sankt Peter-Ording. The wind prediction was only one color: red. Six Beaufort, in gales even to eight, that was announced. Reason enough for some pilots to cancel. A reduced field of intrepid drew it on Saturday nevertheless on the sandbank, accompanied by a team of the NDR (here the TV contribution). The first race of classes two and three had it in itself. The wind howled with six Beaufort from the west. This means: half wind. And that means: Fullspeed! Four kilometers lay between the Wendemarken, in between a piste like from 50 shades of gray. Sometimes soft, sometimes sticky. Sometimes as smooth as silk, sometimes ribbelig as cobblestone. With trenches, edges and water holes, which felt larger and deeper than the Mecklenburg Lake District. And a measured speed of 110 kilometers per hour. From a distance the sails were barely visible, only the geysers shooting in the sky. 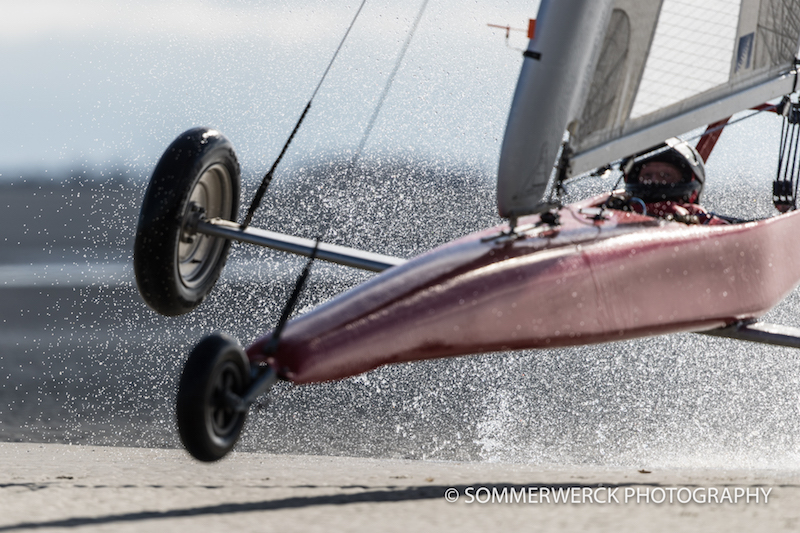 Arne Kelm stayed on the ground. A few kilograms of sand pressed his car onto the beach, like a snow-plow, he drove through the lunar landscape, almost always on the right track. Others immersed their yacht in the floods, they could only snatch the water from them thanks to the help of the rescue vehicle. Even Arnd Mahrt and Sven Harder in places two and three could not keep the connection to Kelm. For Norbert Paulsen, the regatta, after kissing a prism edge, finished the shrouds with the pressure and the mast folded like a felled birch. In class 2 it was Jens Markowitz, who mastered the challenging course best. Probably the beach on Juist always looks like this. Wolfgang Bartling and Andy Gerlach followed.
The mini-yachts were shorter, but not less violent. Everything was required by the pilots. It had almost something of ballet. In the wends, some pilots shot so many pirouettes that Nureyev would have been envious. First a 360 degree rotation, then two, then three. Even five gyros in a maneuver were counted. It was a little surprising that Sven Kraja, the permanent German champion in this class, had the best deal with these adverse conditions. Harald Fien and Kay-Enno Brink, who took a trip from the Class 3 to the mini-yachts this weekend, also showed up as a storm test. As the fastest woman, Gitta Steinhusen came fourth.
On the second day everything should be different. Although the wind blew vigorously in the morning, it quickly lost its pace, so the races had to be broken even later due to lull. At least the slope was constant. Constantly bad. Classes 2 and 3 started two races. And they had it in themselves. In a tight space the yachts had to cross after the start to the first Wendemarke. Often, only a few meters lay between the blows. Bug at the stern and stern at the bow. Collisions did not fail. In the first race the plank of Sven Harder breaks like a carious tooth, which bites on a cherry kernel. There was a turmoil between three yachts. At the second start, Karsten Meyer (here a video of the start including collision).
Also at the top of the field changed a lot. In the two races, Arnd Mahrt had no chance for Arne Kelm, the day ahead, and reigning German champion Arne Kelm. Two first places on the second day meant the overall victory for Mahrt, in front of his opponent from Kiel. Karl-Heinz Wendisch sailed for third place.
The class-2, which also likes to celebrate itself as the Gentlemen class, made it a bit more leisurely. But not lamier. With a total of three victories, the Juister Jens Markowitz won the Osterregatta without a big counter-defense of his opponents, Wolfgang Bartling came in second place before Andy Gerlach.
The mini yachts were fought to the last. Well, Sven Kraja did not want to leave the top spot, but the places two and three were dragged violently at the sheet. In the end, Kay-Enno Brink finished second. The winner of the hearts is the only 14-year-old Fynn Beugholt, the youngest starter of the field, who did not even respect the “old hares” at Easter and sailed to third place. Fastest woman was Gitta Steinhusen to fifth place.
A good improvement goes on this way to Vincent Letellier. The class-3 pilot had passed a self-inflicted mishap on the way to the start on Sunday morning, which unfortunately ended with a broken leg. Letellier had to be taken to Husum hospital. He is so far so good, send greetings from the hospital bed.
Results here.  Thanks to Roland Gaebler for the shout.

the bridge of the ganja