First event of the 2017 Figaro season for Alexia Barrier: the Figaro Golfe race. What a bad ass!
On March 1st, filled with enthusiasm, Alexia took the start of the Mediterranean 230 NM solo race.The first leg, a good 150 NM, took our sailor from La Grande Motte, around Porquerolles, to finish in Marseille. Her opponents, as well as current sparing partners, were Mike Cohen, Pierre Quiroga and Laurent Pellecuer.
The start was given at 5pm, in the light of a beautiful sunset. Next came the Giens peninsula, Porquerolles, Cape Sicier; the course was long, different options  were taken by the sailors. At 7.30 PM the next day, Alexia crossed the finish line
behind Laurent Pellecuer, thus ending 4th. “I will not finish behind everyone else next time! Out of question!”
Because of a strong weather warning , and definitely rough wind and sea conditions, the start of the second leg Marseille – La Grande Motte was postponed to Sunday morning 7AM. From there, 80 NM, Alexia remained in the game, got in second position for a few hours, when CEM young sailor Pierre Quiroga caught up to her, to finally reach the second place, therefore ensuring his victory overall. 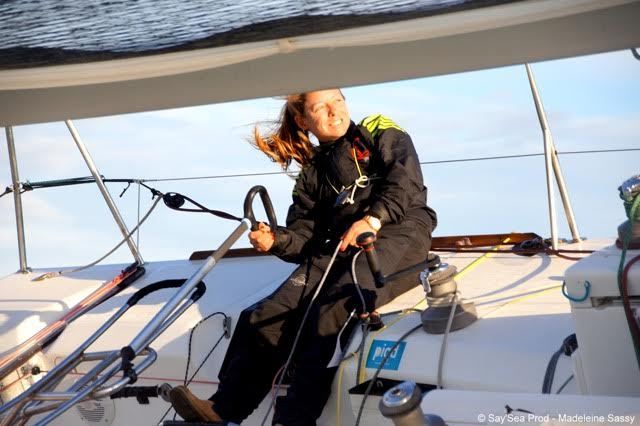 “It’s been a long time since my last solo race. I am just getting my bearings back. ” My only motto at the moment: never give up. Not an inch in the transition phase in front of Saintes Maries de la Mer , I had to work quite a lot on the sails and trim, not to let the boat stop when the wind dropped . The fight against Pierre on the last run was thrilling, only 200m from each other… Only a minute…Nothing , in fact! A great race anyway, good moments, and more particularly, excellent practice for my next Figaro race, the Maitre Coq Solo Race. ”
Her boat demasted, ready for travelling by truck on Tuesday at 8AM, headed to Sables d’Olonne,where the next training sessions are taking place. Beside her Figaro racing, Alexia will have to focus on her other objective: Tour de France à la Voile, on Diam 24 Pays de l’OR/Herault, before flying to the « Saint Barth Bucket Regatta » on maxi yacht Sojana, a 35m Farr design, sailing under British flag. From adventure… to adventure…
– Madeleine Sassy