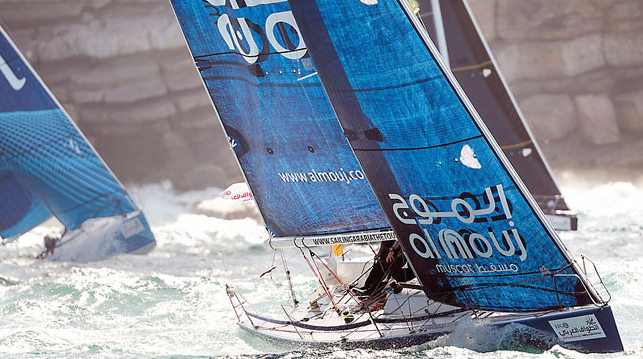 Exhausted but still buzzing after racing 150nm down the stunning coastlines of Oman and the UAE, Caterina Nitto is enjoying some downtime at the halfway point of EFG Sailing Arabia – The Tour. With a day to spare before the action kicks off again, the Italian sailor finds herself at Abu Dhabi’s Sheikh Zayed Grand Mosque. Tranquil and serene, it’s a world away from her busy life as a professional sailor – perfect place to reflect on the first few legs of a unique regatta.
‘The best thing about this race is the mix of cultures and religions, and the adventure,’ she says. ‘We might all be from different backgrounds but we share the same passion for sailing.’
One week in and Nitto is fast discovering the ethos of EFG Sailing Arabia – The Tour: five offshore legs totalling 763 miles raced on identical Farr 30s around the Arabian Gulf, offering thrilling competition for the international crews while showcasing the very best of the region.
Nitto’s Sardinian Adelasia di Torres team, owned by Renato Azara, was among a fleet of eight international teams that set out this year from Oman’s capital city Muscat, heading north to pitstops in Sohar then Khasab on the stunning Musandam Peninsula. From there it was south to Abu Dhabi before the two longest legs to Doha in Qatar then returning to Dubai, with three rounds of inshore racing thrown in to spice up the mix. – Read on.