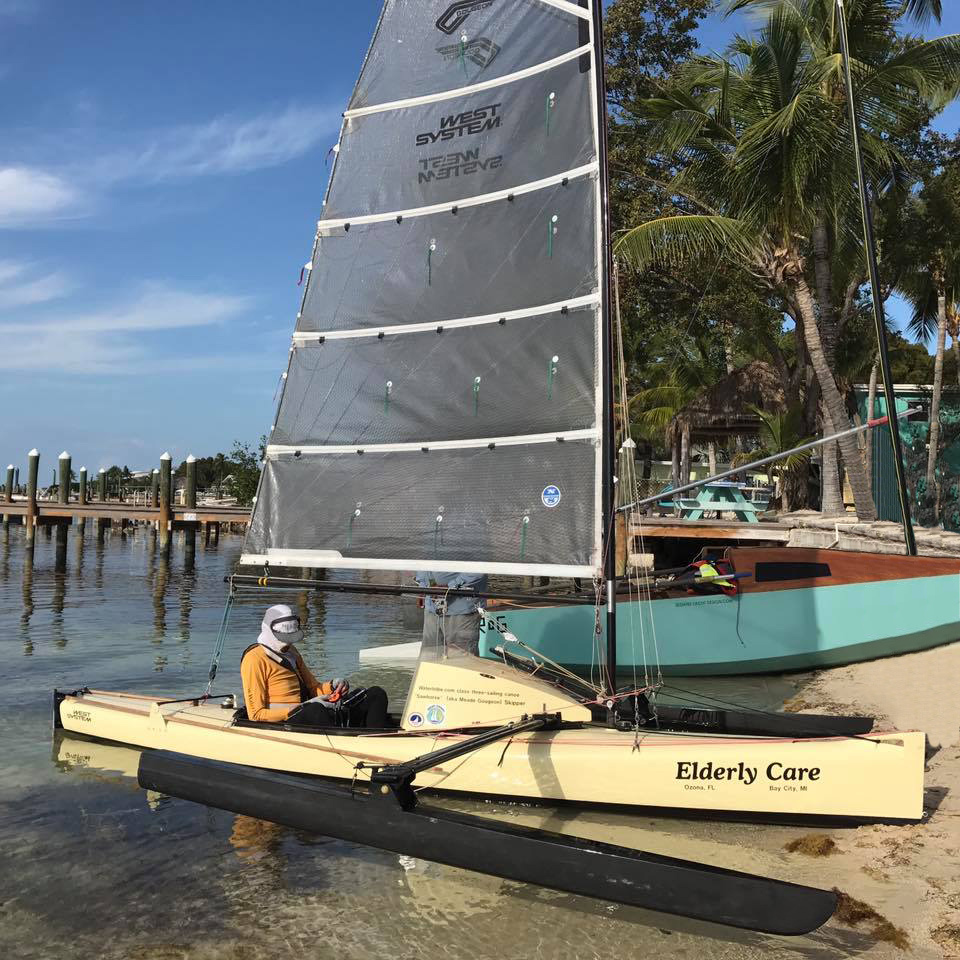 UPDATE: We just got word from Meade this morning that based on the EC’s “unusual start” this year, his time has just been corrected to put him at second place in Class 3.
Meade Gougeon, aboard his outrigger sail canoe ELDERLY CARE, placed first in his class in the Everglades Challenge on March 10, 2017.
The 2017 Everglades Challenge may have been the toughest in 15 years. Gougeon described it as “Three days of high winds, headwinds, and rough seas. It was wet and bumpy.” More than half of the 108-boat fleet dropped out, with just 51 entrants making it across the finish line ahead of the 8-day time limit.
The grueling 300-mile race is sponsored by the Watertribe organization, and forbids the use of motors. All race vessels must be either wind or human-powered. Competing boats must be entirely self-sufficient, carrying their own safety gear, food, and water which may be supplemented only by what racers can buy along the way. Support crews are not allowed.
Gougeon finished first in Class 3-Sailing Canoes. He placed fifth among the singlehanded racers and was 13th to finish overall. At age 78, he was also the oldest challenger to finish the race. Everyone who enters the Everglades Challenge must take a tribal name. Meade’s is “Sawhorse.”
To qualify for the Sailing Canoe class, a vessel must be narrow enough to fit up a creek. The 15′ ELDERLY CARE is stabilized with outriggers that can be easily removed and stowed. It features a comfortable chair which reclines into a bed. The boat also has a built-in tent arrangement that provides shelter from the elements and for sleeping.
“The boat saved my bacon in a whole lot of ways,” Gougeon said. These included the tent setup. He hauled ELDERLY CARE ashore at dusk each night and slept under the boat’s tent, getting back in the water around 7:00 AM.
“The boat is so fast that it allowed me enough time to sleep. My competitors would pass me in the night, but I’d catch up and pass them in the daytime. At the end of the race, I wasn’t sleep deprived like the rest of the finishers,” Gougeon said.
Gougeon is the founder of Gougeon Brothers, Inc., manufacturer or WEST SYSTEM and PRO-SET Epoxies in Bay City, Michigan. He has competed in The Everglades Challenge most years since 2010, and also placed first in his class in 2014. Photo thanks to Paula Martel.