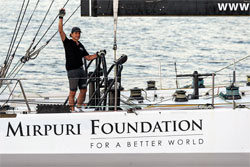 Those of us lucky enough to cross an ocean or race offshore for any length of time will have an innate sense of appreciation and wonder at the beauty and power of the sea – it’s this very primal urge within us that binds us all together as sailors. And yet, as we know, some of the most important features of the sea and its ecosystems are under threat from human interference – most likely for the first time in the planet’s history. Consequences now include measurable effects and influence on not just our aesthetic values as sailors but also the lives and well-being of those who depend on being on and around the sea.
The Mirpuri Foundation is a non-profit organisation set up by businessman and philanthropist Paulo Mirpuri as a vehicle to support specific projects in many diverse but interrelated fields, including marine conservation, wildlife conservation and general social responsibility.
In marine conservation the foundation is promoting a number of projects and initiatives relating to ocean conservation and events to consolidate and reinforce these objectives moving forward into the future. Besides specific projects such as the Save the Ocean campaign, the Mirpuri Foundation also works to spread a message of increasing awareness among global authorities of the importance of protecting oceans and of the wider dangers faced by the whole planet due to pollution and the effects of the human contribution to climate change – over which we do have power to control. – Read on.