Perhaps it is because we are older, perhaps with that comes a better understanding for and appreciation of our parents who made it possible for most of us to fall in love with this sport that we can never seem to get enough of.. 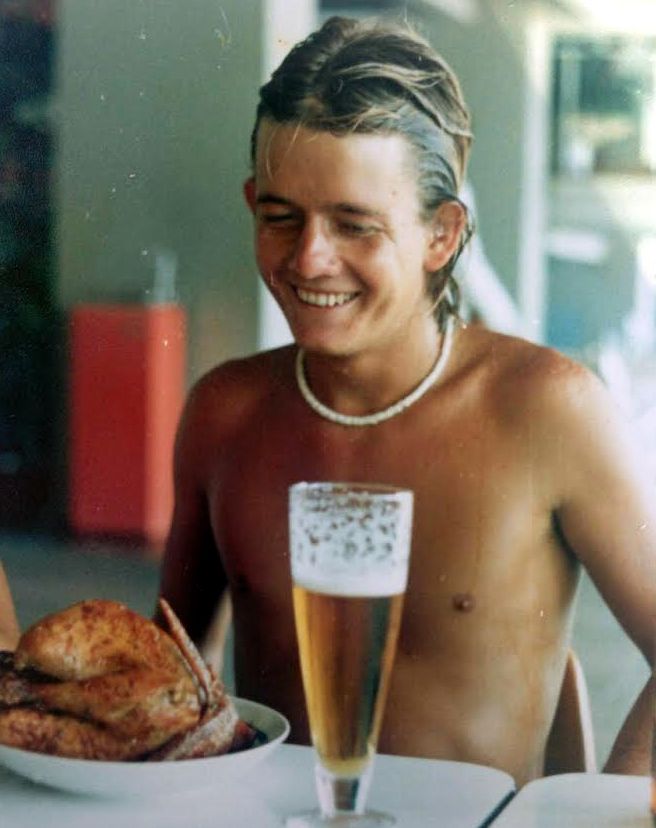 I had dinner with a friend of mine the other day. She was constantly checking her phone. Her 20 year old daughter had moved to live with her father in Germany and her three-times-a-day text had not arrived. She was worried. “She usually text’s at the same time every day,” my friend said. “I can’t imagine what’s gone wrong.” I nodded in sympathy. I am a parent and I totally understand.

The next day I had lunch with one of my oldest and sweetest friends. Without her I would never have had the most awesome life that I have had. That’s a true statement. I was a snotty nosed kid walking the docks in Durban, South Africa dreaming of a life on the lip of an ocean swell; but clueless. That’s when I met Lyn Lindsay. She was First Mate of one of South Africa’s best know yachts – Dabulamanzi. They had just arrived from the Seychelles and they were planning on doing the Cape Town to Uruguay race. I was a hands-on-my-knees sailmaker at Elvstrom Sails in Durban and the boat needed some sails repaired. I offered to help and Lyn saw something that she liked. Enthusiasm, innocence, and a bucket full of bullshit. Lyn asked if I would like to join the boat for the race to Uruguay.
OK let’s put this into perspective. I was a 20 year old “kid”. I had no offshore sailing experience. I had a long term girlfriend, my first love, and had just been offered an adventure of a lifetime. I wasn’t sure. I walked the damp streets of Durban searching my soul. Should I go for it or should I stay with Liz?  It never once occurred to me that my parents had any say in the matter. My Mom was dead but I was very close to my Dad and Step-Mom. I wandered some more and at some point I made a decision. I was going to join the crew.
And I did. We left Cape Town on a blustery January day and sailed across the South Atlantic. Along the way I turned 21. Jeeze I am pushing six decades now and as I said I have children. I am not sure how I feel about things. Would I let my boys “just go for it?”  Probably, but then, maybe not. Back then the only means of communication was by letter. Or if desperate, telegram. They charged by the character and it was expensive. So expensive that when I was lost and presumed dead in the 1979 Fastnet Race, and then found alive, my parents sent me a telegram. They signed it MaenPa. That’s Afrikaans for MomandDad. See, shorter=cheaper.
The friend with whom I had lunch with, Lyn Lindsay, brought along a pile of photographs from our wonderful adventure. We not only sailed to Uruguay but continued up the coast of Brazil to the Caribbean. She dug through the photos and found one of me. I had just turned 21. I was broke but the captain of the boat had offered to buy me lunch; a beer and a whole chicken. I look at the picture now and I am not sure what I see. I see a happy kid with a whole lot more hair than I have now. I have a son who looks just like me. He is only 16, so he is not leaving just yet, but I wonder how much courage it took for my parents to give me their blessing. They let me go on a trip across the Atlantic and eventually around the world. Postcards would be sent when I had money for a stamp and sometimes they got lost. They could not follow me daily on Facebook, or Twitter, or Instagram. Definitely not Snap Chat. Nope I was out there making it; or not.
I have huge respect for parents of the past. How much courage did it take to say goodbye – and hope beyond hope – that not only had they done a great job raising their (in my case) son, but that the traffic and jams of life did not trip them up along the way. Thank you Dad, and you too Judy, my StepMom. – Brian Hancock.