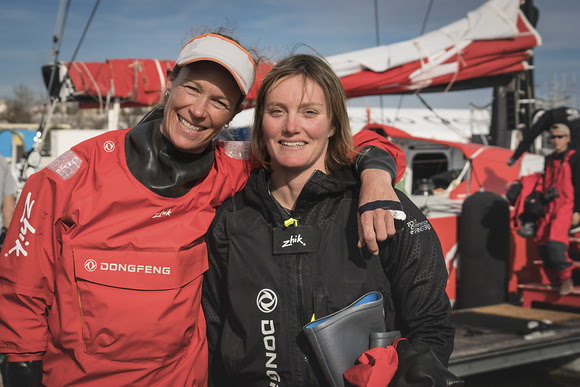 The Dongfeng boat is starting to fill up with the two ladies being announced to join the team.

Making total sense to recruit two extra brains, pairs of eyes, sets of muscles and each with an accomplished sailing resume, Charles Caudrelier has decided that Dongfeng will be a fully crewed team for the 2017-2018 Volvo Ocean Race.

Both cat sailors and therefore totally experienced in asymmetric sailing the two female members have a handful of Olympic Campaigns between them and a couple of Volvo Ocean Races and a Sydney to Hobart to boot.

Also worthwhile to note that while most Olympic sailors are only used to sailing with the same sex both Carolijn & Marie sailed as part of a mixed crew with Carolijn being all the more remarkable for her Olympic career in the flagship Tornado Class.

So, Carolijn Brouwer, Olympic Tornado Helm representing the Netherlands, actually caught Charles Caudrelier’s eye as the inshore helmsperson of SCA in the last Volvo and can count 2 Volvos to her name already. And she didn’t do too badly in 2014-15 with 2 firsts and a second under her belt in the inshore series helping the team to a podium finish in the in-port series and was actually chosen by Charles because “she beat us many times”.

Marie Riou (FRA) perhaps has less offshore experience but none the less has 4 world championships in the Nacra 17 to her name and in December of last year joined the Ubox/Dongfeng team in the Rolex Sydney Hobart Race resulting in a surprise to many (but not to the team) 3rd overall in IRC (and 1st in ORCi). She clearly impressed the Dongfeng skipper as she becomes female number two in Dongfeng’s line up and it is not just Riou’s sailing ability which impressed but in Caudrelier’s words “she is used to sailing with guys”.

So Dongfeng has her skipper, 3 top males and a couple of top females – the boat is filling up. Who will be the Chinese contingent, because there is sure to be some, and who will be the naviguesser?

All will be revealed in time I am sure.

all the way with usa