The Environment
While some people were peeing all over themselves over the fact that Orange Julius wasn’t his usual raging psychotic self the other night, he has once again duped you. While you weren’t looking,  he shit all over the water that you drink, enjoy and treasure. 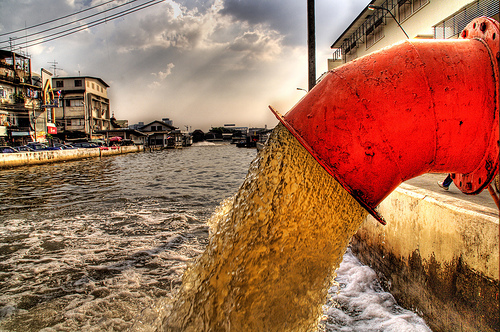 Cheeto Jesus stepped up his attack on federal environmental protections Tuesday, issuing an order directing his administration to begin the long process of rolling back sweeping clean water rules that were enacted by his predecessor.
The order directing the Environmental Protection Agency to set about dismantling the Waters of the United States rule takes aim at one of President Obama’s signature environmental legacies, a far-reaching anti-pollution effort that expanded the authority of regulators over the nation’s waterways and wetlands.
“It is such a horrible, horrible rule,” Trump said as he signed the directive Tuesday aimed at the water rules. “It has such a nice name, but everything about it is bad.” He declared the rule, championed by environmental groups to give the EPA broad authority over nearly two-thirds of the waterways in the nation, “one of the worst examples of federal regulation” and “a massive power grab.”
Many industries take issue with that interpretation. Tuesday’s order, for example, was met with a swift rebuke from sport fishing and other groups, including  the Natural Resources Defense Council. The statement said the clean water rule has been a boon to the economy, sustaining hundreds of thousands of jobs in their industries.
“Sports men and women will do everything within their power to compel the administration to change course and to use the Clean Water Act to improve, not worsen, the nation’s waterways,” a statement from a half-dozen of the organizations said.
Before you start attacking me for defending clean water (that is how absurd the Trumptard ‘mentality’ is), you should know the backstory to this. Click here. – ed.