too fast to sell 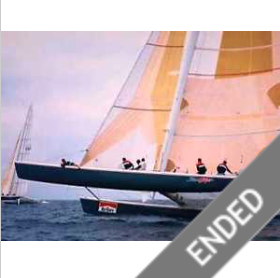 The soft-sailed sistership to the America’s Cup winning Stars and Stripes catamaran may have crushed all sorts of records under Steve Fossett back in the day, but she’s better known these days for dropping her rig to the dark, deep bottom of Lake Huron a few years back.  The rig was marked and recovered, but the lawsuit between her Chicago charterer and Florida owners over repairing the rig took S&S meant the newly rediscovered record runner would sit in an Illinois parking lot for years instead of blasting from point to point.
Last we heard, ideosyncratic cruiser/racer Freddy Mills had picked her up for a song and ran her on day charters in New England, but last week someone tested the market for record chasers on eBay from Miami.   After a week on the market and zero bids, it seems the 60-foot cat ain’t going anywhere – not for a starting bid of $375,000 or a ‘Buy It Now’ number at more than half a mil for the 30-year old S&S cat.  We can see a real historical premium for the cup-winning cat (still in Mexico), but this thing is only good for one thing: Record chasing with a very experienced crew aboard.  Add a couple hundred grand for a real foil and an adjustable t-rudder package and no flatwater record in the world would be safe.
Looking for the fastest boat of her day?  Maybe eBay user Propriedades can tell you more.

pie in the sky

not ready for prime time