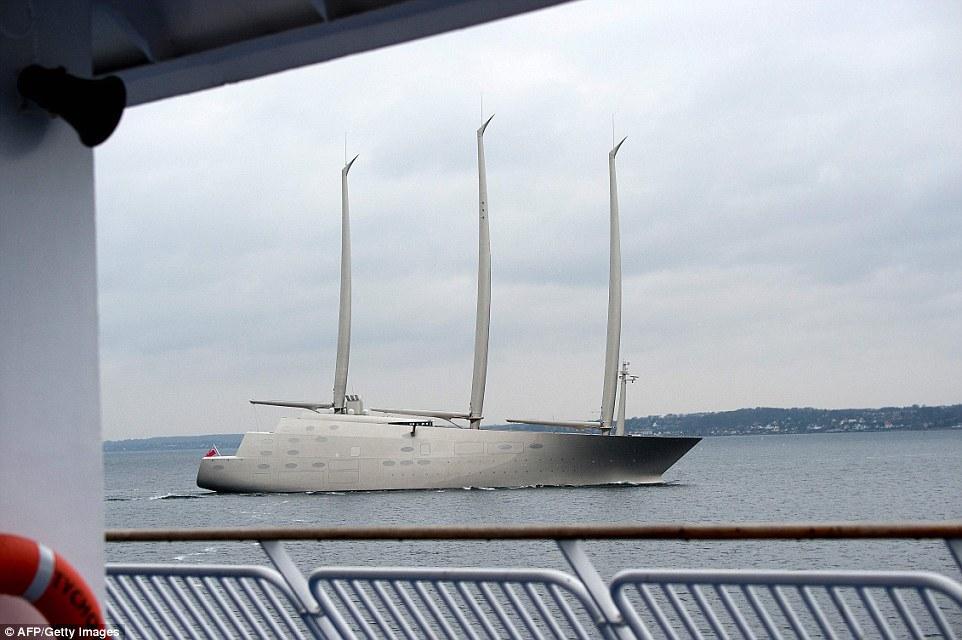 It seems like something out of a James Bond Movie. Russian billionaire Andrey Igorevich Melnichenko is leveling up. Much like how America’s new POTUS Donald little fingers Trump went from reality star and licensing kingpin, to the MOTHER FU&*#NG LEADER OF THE FREE WORLD, Melnichenko has traded in his old, flabby, inexpensive Motor Yacht A for his new boo the Sailing Yacht A. This isn’t the first time Andrey has been in the public eye due to his luxury yachts. However, this time people are taking a good hard look at the billionaire’s new super yacht, and wondering just what in the hell it actually is. I mean the timing just seems fishy no? This behemoth of the sea is arriving in the slimy hands of Vlady’s bestie just as old Pu**sy Grabber takes office, amid a cloud of interference from Russia…Coincidence? Me thinks not.
At a price of $450 million, this is no small investment. What has caught many people’s attention is the fact that this is actually a sailing yacht. With a length of 468-feet,  it is easy to see why this yacht, basically the floating version of Anna Nicole Smith in her heyday is gaining some serious media attention as it sails from Germany to is new home in Russia. The three 300ft masts tower at a height that is even higher than that of Big Ben. As far as technology and design is concerned, there are many who are claiming this new super sailing yacht is the most advanced yacht in the world to date. We cannot confirm that it also has the capability to rig elections.
This massive ship has a high-tech control system which is accessed by a touch panel display in the bridge. This control system can take charge of anything from raising the masts to controlling the lighting on the ship. The crew can even deploy the anchor with just a quick brush of their finger, similar to how they hack email accounts.  This new innovation has been setting a whole new bar for ships all around the world.
The safety features of this ship are very impressive as well. Bomb proof glass is the material of choice for all of the windows on this vessel. With a submarine, four-car garage, and a helipad, this yacht is a transportation super house. Melnichenko will be able to explore the ocean in his submarine, arrive in style in his supercars, or be flown to his meetings in a private helicopter.
This yacht is starting to sound more and more like something out of a Hollywood production. After Arnold Schwarzenegger is done with Donald Trump’s old job, maybe he can star in a movie that takes down Vladimir Putin while he is sipping vodka shirtless on a horse, and somehow throw this ship into the fray. Hey Hollywood, I’m available anytime for ideas. I have the best brain when it comes to making movies, a brain that’s so bigly even Rosie O’donnell would be jealous.
Melnichenko pumped millions of dollars into the research and development of this super yacht. It is amazing to see what can happen when massive amounts of passion, resources, and murdered russian journalist are combined. It will be exciting to see if any of the other billionaires in the world respond to the creation of this sailing super yacht with creations of their own. Hey Steve Ballmer, that “Octopus” thing you got is cute, but it’s got nothing on Trump, errr Putin errr Melnichenko’s new ride.  For now, this yacht will continue to be the most advanced and recognizable super yacht in the world. Yacht Force One is reportedly on the way, as Sean Spicer recently told the press it will be the first yacht of its kind with this technology. #alternativefacts
With an underwater observation room, perfect for bath robe wearing and eight floors, it seems as though the interior of this super yacht is going to match the gaudy design of the exterior. With Melnichenko nearly $12 billion net worth (yes Donald, old Andrey is an ACTUAL billionaire), this yacht seems like just a fun side project for this wealthy Russian businessman. With the ability to host 20 guest and a crew of 54 – that’s one hell of a hooker to guest ratio – it is almost as if Melnichenko has created a small floating, um, village.
The future of this yacht is as bright as the future of democracy in America is dim, it currently heads to Spain for sea trials, but it’s only a matter of time until the fearsome threesome of Igor, Donny & Puty enjoy some time in the sun aboard this mega monstrosity of a ship. We certainly hope it doesn’t sink with all aboard presumed drowned.

woody in a week