Longtime Anarchist Dave Clark updates all of you foiling freaks on the new UFO.  Ask him specifics in the thread. Check out the latest video of some winter UFO foiling from the air and the water over on Youtube. 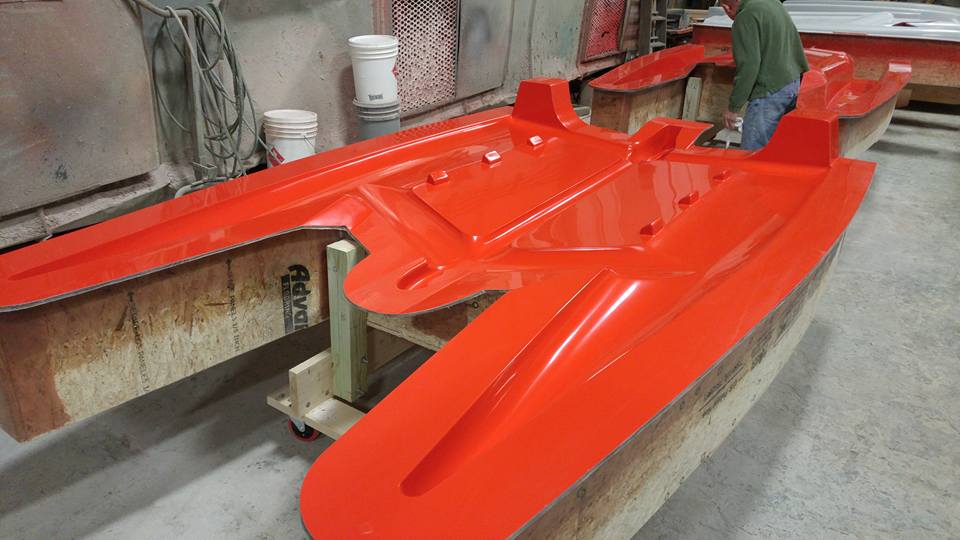 Hey Folks,
Time to get excited! Things are coming together over here in Rhode Island. The UFO is finally through the stage of production preparation that I’ve come to refer to as “Industrial foreplay” and it’s go time. The hull and deck molds move back onto the Zim Sailing factory floor this week, where they’ll commence to build the first 40 boats. The first 100 sets of foil struts are being finished up at the extruder in New Hampshire. The next 50 sets of spars are on their way from the manufacturer overseas. North Sails is hard at work making the first 20 suits of sails and Schaffer Marine in New Bedford is going full-tilt machining parts. The objective is to build 100 to 150 UFOs in 2017 with the capacity to step up production further as the class grows. This is the start of the period where you folks with deposits will be getting the heads up of the materials nearing the mold and thus the option to opt in or out.
The Tweaks: What’s changed since The Foiling Week?
Controls: Every little percentage gain in foil control allows for a truer flight path. While these things aren’t noticeable in the beginner or intermediate use ranges, they pay off in spades at the high end, enabling you to fly higher and more aggressively in all conditions.
We added a stiffer all-carbon wand with a carbon paddle, taking all available buffering out of the wand. Buffering does a few beneficial things but also comes with some flaws, especially in extremely gusty conditions. All told the stiffer wand realizes the full benefit of our ‘mountain goat’ style gearing.
We lengthened the wand sprit. There’s been a revolution in the moth class around getting the wand as far forward as possible, as it increases the gain on the sensor and thus responds to pitch changes more immediately. This enables the boat to be flown more confidently in big waves.
Both of these things benefit performance racers and recreational sailors. From a performance racers perspective, the combined effects enable you to race harder. From a recreational perspective, it makes the boat hardier and smoother in challenging conditions.
Sail: We found it necessary to add a full-length batten just above the clew to get rid of a set of creases that propagated upwards from the tack. Further we added a cutout for the clew to add an extra bit of leech tensioning capacity, as a tight leech is critical to going really really fast on foils. We also added a fillet bulb to the bottom of the endplate which assures a solid deck seal. This bumps up the efficiency of the sail by another increment. The front end of the fillet bulb additionally functions as a pouch to stow the halyard and other items, closing with Velcro.
Dolly: While the single-axle beachcat dolly is the best option for a catamaran, keeping the bunks upright and lining them up on both bows is more annoying than it should be. Further, while a retaining strap across the deck does hold the dolly, it’s more trouble than it could be to tie on and untie. We found that the easiest usable configuration is a beachcat dolly with cylindrical pads and short tethers on either side, which clip to the gunwales. This makes the dolly easier to put on and take off the bottom. Further we concluded that a wider wheelbase made it easier to pull the boat towards a ramp on a reach, so we moved the wheels outboard of the hull. A tertiary benefit is that the new dolly from Dynamic Dollies packs exceptionally well.
Hiking straps: Outstandingly short sailors and outstandingly tall ones pointed out that the straps were either too far away or too close for them. Making their position adjustable solves this problem easily.  People also wanted the straps to stand up more, so that sliding a foot into one would be easier. To do this, we rigged them with rigid tubing, which causes the straps to stand up.
Cosmetics: While I personally often scoff at considerations like this, it’s nonetheless an important feature to a good percentage of people and the UFO has gotten noticeably more spruced-up. While our original hull tooling was incapable of imparting a high gloss finish, the production tooling imparts a polished gleam to the gel-coat. Further, all the aluminum parts are anodized black, there’s a little bit more exposed carbon in the package and a few more decals and bright colors.  In line with the UFOs alien aesthetic, the production sails are clear with neon green trim, which together with the white hull and black hardware, foils and spars yields a tri-tone neon green, white and black color scheme. The available deck pad color options are neon green, black and white and the gelcoat options are black or white.
The fully enumerated list of tiny updates, improvements, cleanups is too long to go into. This is merely the shortlist. Beyond that, it’s the same old basic fun-machine we know and love.  And with that, I need to get back to the fight.
Cheers,
Dave Clark
President
Fulcrum Speedworks llc.