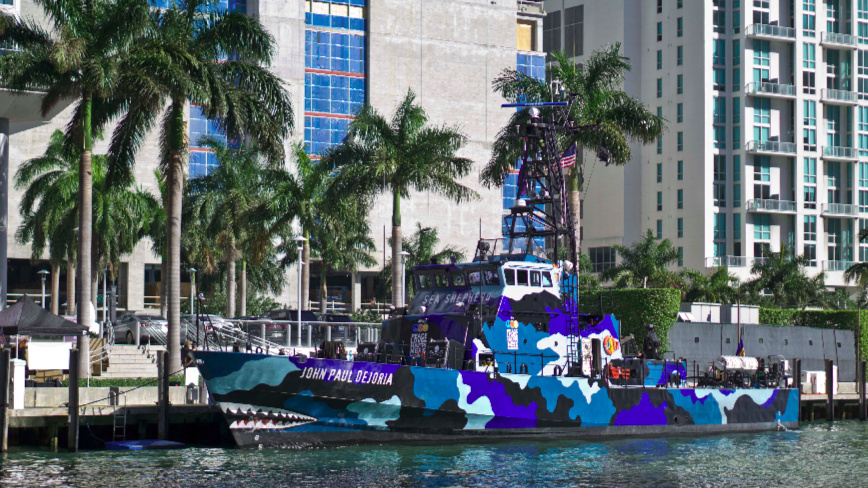 On Tuesday, the Sea Shepherd Conservation Society unveiled its newest vessel, the M/V John Paul DeJoria, at a marina in Miami. The DeJoria is one of two 110-foot Island-class patrol boats that Sea Shepherd purchased from the U.S. Coast Guard in 2015.
Her namesake, John Paul DeJoria, is a co-founder of John Paul Mitchell Systems salon products and has worked with Sea Shepherd since 1998. He is a member of the group’s advisory board, and he also sponsored the purchase of the DeJoria’s sister ship, the Farley Mowat.
“We’re proud today to unveil and to launch the John Paul DeJoria,” said Captain Paul Watson, Sea Shepherd’s founder. “I can’t think of a person who I am more proud to have a name on a vessel.” Captain Watson said that the DeJoria’s maiden voyage will include anti-poaching work off Malpelo Island, Cocos Island and the Galapagos off Central America.
Watson also mentioned the group’s recent work in combating wildlife trafficking on shore, particularly in the Chinese shark fin trade. “We’re making progress in both stopping poachers and, also on the other end, trying to convince governments that we have to put an end to this,” he said. Read on.

three in the pink