the lioness of charleston 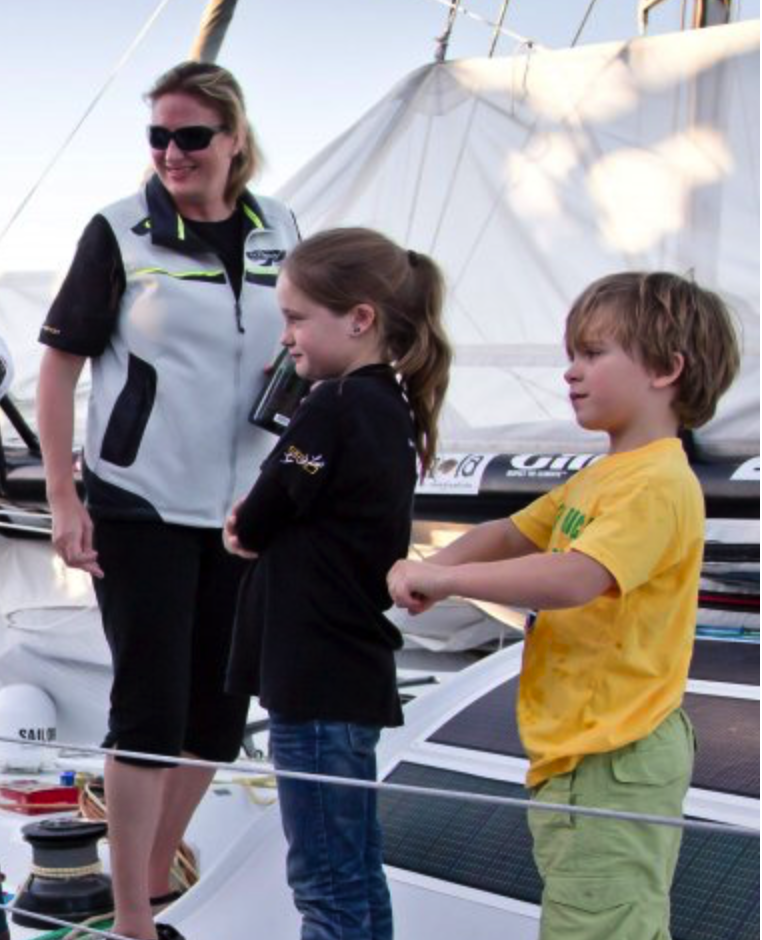 It is with an incredibly heavy heart that we announce the death of one of the Charleston sailing community’s most important figures.  Just 46 years old, former Charleston Race Week Director of Marketing/Sponsorship/PR Meaghan Van Liew died yesterday after complications related to a liver transplant operation – an operation required after damage her liver suffered from medication she took for an unrelated nerve issue.
Along with then-husband Brad Van Liew, Meaghan was the driving force behind Charleston Race Week’s explosion from a small regional regatta to America’s biggest sailing event.  She also ran the SC Maritime Foundation and oversaw the completion and running of the Spirit of South Carolina schooner and it’s educational youth sailing program.  Meaghan took on the nearly impossible task of raising two kids on the road while running a round-the-world IMOCA program for Brad’s dream of becoming the first American to win a RTW race.  From Balance Bar, to Tommy Hilfiger to Le Pengouin during the final days of the Around Alone, Meaghan sacrificed everything of her own to make sure her children had great life experiences and her then-husband had a chance to win.
Professionally, Meaghan was one of the first major event organizers to put her faith in Sailing Anarchy to help jump-start Charleston Race Week’s march to prominence, and her risky move led to the worldwide acceptance we have today.  She also was one of the few American sponsorship agents at the time (or since!) to secure real funding for offshore racing from major corporations.  Creativity, work ethic, risk taking, and sacrifice for those you love – these were her foundations.
On a more personal level, Meaghan was one of my closest friends, and every year, Mer, the dog, and I would spend a week with her and the kids before Charleston Race Week to catch up and brainstorm new ideas to grow the event.  When her marriage fell apart, she devoted herself to helping her children navigate the tough emotional situation – often to her own detriment.  She ALWAYS put her children, her family, her friends, her clients before herself.
If there’s an afterlife, we pray that Meaghan Van Liew has finally found some time there to devote to herself.  Meaghan, we will always love you and remember you.  Check in to ex-husband Brad’s Facebook Page here, and there is a thread here. Ainhoa Sanchez photo.
Signed,
Alan, Meredith, Joey, Kuma (deceased), Cricket (deceased)
MEMORIAL SERVICE and celebration of Meaghan’s life will be held at the Charleston Maritime Center (10 Wharfside St, Charleston, SC) on Sunday at 3pm.
UPDATE: We spoke to a gutted Brad Van Liew moments ago, and he requested that we ask the sailing community to please refrain from calling over the next few days so he can tend to his family in their mourning.  His phone has been blowing up from South America, New Zealand, Australia, the UK, France, helping him to realizes just how many people Meg touched over the years.
UPDATE 2: We are going down to Meg’s memorial service on Sunday to pay our respects.  If you have great stories about Meg, find me at the Maritime Center so we can put together a video tribute to a great woman.

three is the number