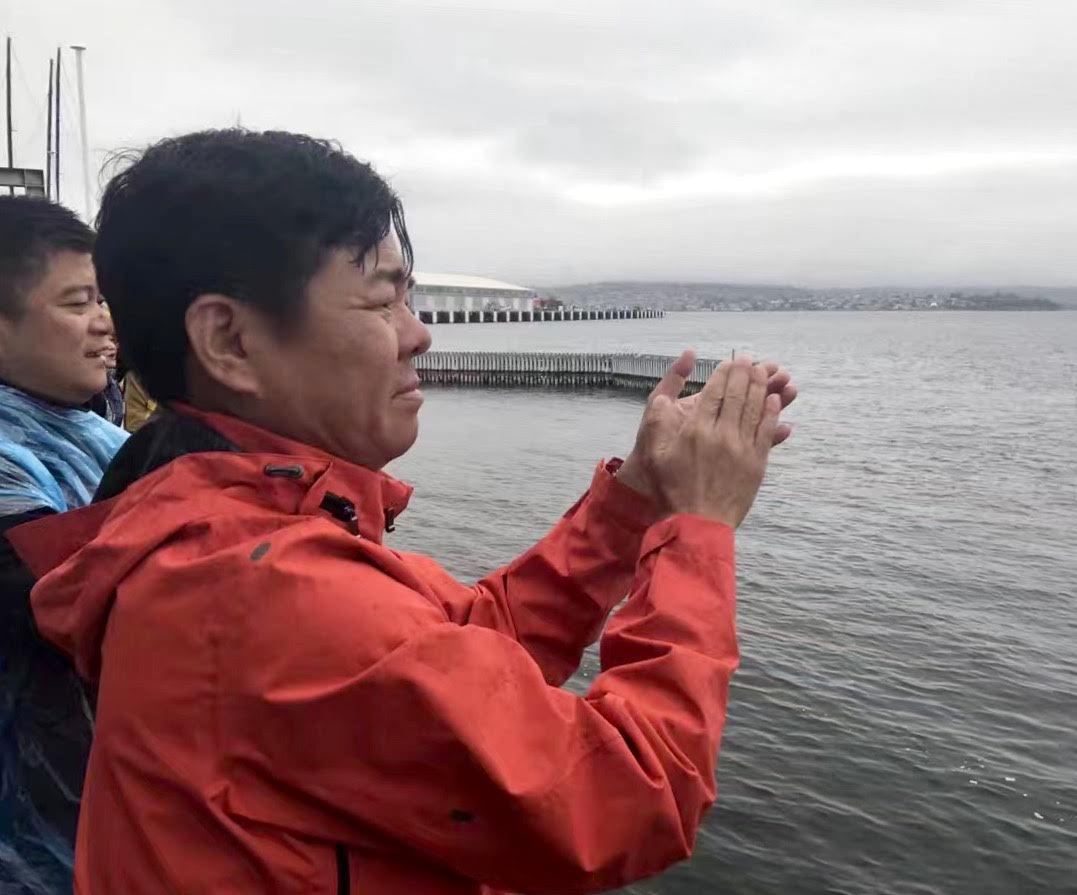 It was less than half a year ago Wang Bin finally decided to go for the Sydney Hobart and set about finding a suitable boat but this is no “Rich Chinese Guy” just wanting to do something different. His Hobart Boat is his seventh sailing boat, three of which he still owns and he has even sailed round the world. His Alubat 60, a pure cruiser was purchased in France so he sailed it home to China. Why bother with shipping?

Then a few years back he decided to get something more substantial.

A friend of his had several print outs of 90 this, 95 that and one for a much shorter and more expensive boat – a Swan 82 called Crackerjack. He name goes before her for Swan enthusiasts. Owned by Sir Keith Millar various Crackerjacks had been well known on the Swan Regatta scene for years. Long story short – he made the wise decision and she became Plus One and moved to China.

Plus One went on to become the first Chinese boat to win her class – Premier Cruising – at Thailand’s King’s Cup or indeed, any regatta outside China, her maintenance schedule increased and she remains in pristine condition to this day. In fact earlier this year she entered the Rolex China Sea Race from Hong Kong down to the Philippines, one of the more disappointing events for Wang Bin’s team where, having performed well in the early part of the race, sail damage meant a disappointing overall result.

It was however in this race that a new partnership was tried for the first time. Plus One, now called UBox was raced with Wang Bin’s crew along with Charles Caudrelier from Dongfeng Race Team as skipper. This added new skills and abilities to the crew while allowing Dongfeng to try out some potential crew members on a bigger boat and although the race was not successful from a race results point of view, it proved the idea of “cross-pollination” was worth exploring further.

In the weeks after the poor performance in the Rolex China Sea, Wang Bin went quiet as the disappointment had clearly hurt then, with just a few months to go he decided to go for the Sydney Hobart Race – he needed a boat.

Several options in Australia were open to him but, in retrospect, he made the wise decision to go after a Cookson 50, two of which Victoire, a former race winner, and Pretty Fly 111) were available for sale in Sydney. By the time he was in a position to offer, Victoire had already been chartered but, in immense credit to her boat captain, Greg Marshall, Pretty Fly III presented so well you could “eat your breakfast off her deck”.

Negotiations complete, she soon became the new UBox. A useful part of the transaction being, that as she was already entered and qualified for The Race, the heat was taken out of the urgency to get things organised for the trip to Hobart.

Did I mention timing was tight? Well the sails arrived and were checked and branded just hours before the start. It had been decided to continue with the cooperation between UBox and Dongfeng Race Team and the crew, just like the last Volvo and the China Sea Race before, would be drawn from both camps with Caudrelier again as skipper and several days were spent training on Sydney Harbour and beyond to ensure the team gelled.

Then it was just time for final preparations and prepare for the main event.

Wang Bin was initially satisfied (perhaps expectant would be a better term) with a safe passage down the Australian coast to Hobart but with a good initial showing as the boat exited through The Heads ahead of sister ship Victoire, perhaps a top 10 might be possible.

In Hobart, it is therefore no surprise that it was a very emotional Wang Bin who welcomed his team to a podium finish in IRC and a 1st Overall in ORCi. So is the Sydney Hobart a ‘done deal’ for this Chinese Entrepreneur? Well as Wang Bin joked “You really think so? I still haven’t won a watch!”

The impact in China of this campaign will do great things for our sport’s promotion there. The start was broadcast live in China and within just a few hours of the finish The People’s Daily, China’s official newspaper, was carrying reports on its website of the team’s success.

I don’t think we have heard the last of this unassuming man’s UBox team.
– Shanghai Sailor

from the calm to the storm