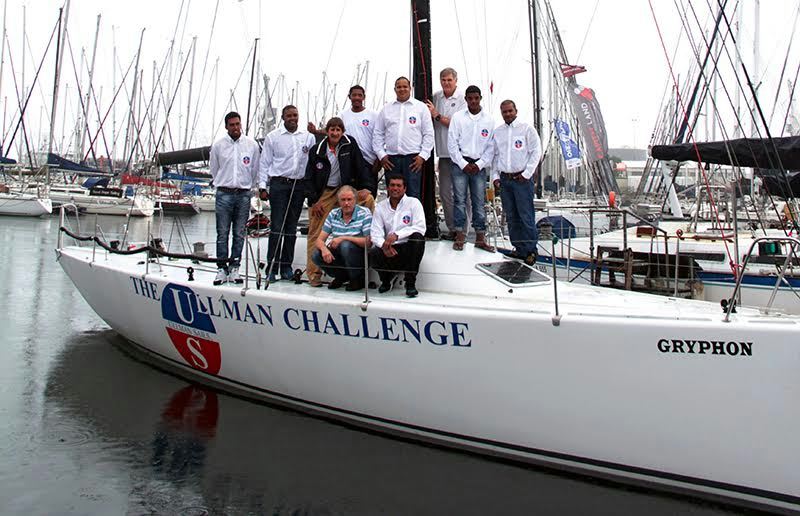 Ok this one is personal. I grew up sailing on a small inland lake in South Africa. We belonged to a blue collar yacht club and traveled all over the country sailing regattas. This was during apartheid and it never occurred to me, or any of the others I was racing against, that there were only white people sailing. We just assumed that black people were not interested in sailing. How absurd, but that was how things were back then.

Fast forward three decades and some of the best sailors in South Africa are black or colored and this story is about one particular team of sailors who will take to the start line on New Years day for the 44th edition of the iconic Cape to Rio Yacht Race. It’s an extraordinary story of having a dream and sticking with it until the dream came true.

In the small town of Hout Bay on the back side of Table Mountain there is a non-profit, the Hout Bay Youth Sailing Development Trust (HBYSDT), set up, in their words, “to make sailing more accessible to previously disadvantaged communities and use sailing and the love for sport as a tool to transcend social barriers.” They have encouraged youth from really impoverished areas around Cape Town to try sailing as a way to expand their horizons and possibly as a way out of their not-so-ideal circumstances. And it’s worked and here is just one story of how it has worked.
A number of non-white sailors had already enjoyed some success out on the race course and some had done the Rio Race in the past, but they wanted to put together a team of youth sailors from impoverished backgrounds to compete with the idea of winning the Rio Race. There are many government programs in South Africa that provide money for sports but these sailors did not want a handout. They reasoned that if they were going to compete on an even footing with the rest of the fleet they were going to have to get the start line the same way as all the others. They were going to have to buy a boat and find sponsorship and so with life savings pooled they were able to scrape together enough money to buy a fairly tricked out ILC 40. Step 1 accomplished.
It was a bold move but it showed that they meant business. Now that they had their boat they needed a slogan and the one that made the most sense and epitomized their campaign was “Following a Dream.” Yes I know to some that can sound a bit corny, but remember these are people who grew up in immense poverty where the idea of chasing a dream was as absurd as the idea of racing across the ocean to Brazil. Slogans can be powerful and with determination they knocked on doors looking for sponsorship. They had a good story but sponsorship dollars can be elusive and the clock was quickly ticking toward the start of the race.
The project leader is a man by the same of Andre Julius. Andre is the manager of the membrane plant at Jannie Reuvers Sails in Cape Town and over the last few decades has helped build the company into one of the biggest and most successful sailmaking companies in the world. Despite being well connected in the sailing and business scene in Cape Town, Andre and his team were finding it difficult to land a sponsor. That was when Ullman Sails decided to step in and help. They found it a compelling story not only because of the background of the sailors, but because they had made a decision to do this on their own without any government support.
Jan Reuvers first come to Cape Town almost 40 years ago also looking to follow his own dream of starting a sail loft. With no money, just an idea, Jan was able build a very successful company. He did so against the odds but with enthusiasm and hard work. Sitting with Andre in his office it struck him that the story of this team of sailors “Following a Dream” was very reminiscent of his own life story and that was how the Ullman Challenge came to be.
Skip Novak, one of the most accomplished sailors in the world, is Brand Ambassador for Ullman Sails and has taken on the role of mentoring the team. Skip has faced his own difficulties with sailing projects (the keel breaking off the maxi-boat Drum just weeks before the start of the 85/86 Whitbread is one example). He recently took a group of Israeli’s and Palestinian’s on an expedition to Antarctica as a way to build dialog between the two disparate groups. And it worked. Skip has encouraged the young crew to embrace the challenge and deal with adversity as it comes their way because for sure they will have plenty of challenges to face on the way to Rio.
I am looking back on this project from the privileged position of being a 20 year old white kid that got his first offshore break racing in the 1979 Cape to Uruguay race (sanctions prevented the race from going to Rio). That single opportunity opened up an extraordinary life for me for which I am truly grateful. I can’t wait to see what this crew, led by their 27 year old skipper Theo Yon, does with their lives once the race is over. I am sure that they will not only find success for themselves, but their bold move to tackle the race without any support; just a dream and enthusiasm, will be an inspiration for others to work their way out of poverty and use sailing as a tool for a better life.
-Brian Hancock

downunder up and over