at the other end

The 2016 Rolex Sydney Hobart Yacht Race was rather more benign than usual if blasting along at over 20 knots of boat speed in 30 kts of breeze is classed as benign.

It was not without its challenges however with the River Derwent playing some of her usual tricks on the sailors with some reporting having to spend significant time at anchor with the wind disappearing coupled to an adverse ebb tide. 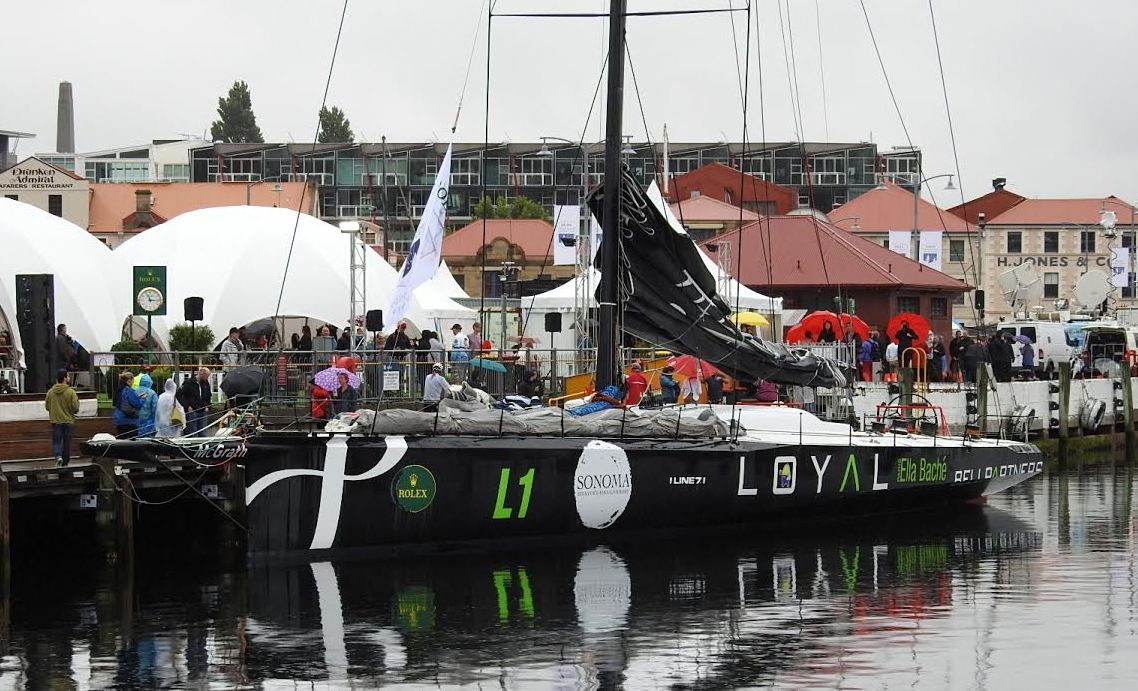 None of these factors seemed to have a bad effect on Perpetual Loyal who benefitted from the north easterly breeze suiting her mode and she literally smoked the existing record set by Wild Oats XI by around 5 hours arriving in the pouring rain in the early hours of this morning. Two other boats also relegated Wild Oats XI down the “fastest ever”standings with Giacomo, the former Groupama from two Volvo Ocean Races back and the much fancied Scallywag both beating the previous race record but it was Giacomo’s pace that most deserved of mention which resulted in her winning the battle in IRC from Loyal, Ichi Ban, last year’s winner Balance and what was the surprise package, UBox.

At some point in the race each of these contenders filled each of the places at the top of the leaderboard but it was Giacomo’s extra pace, getting her in before the wind in the Derwent went light for the night that won the day. 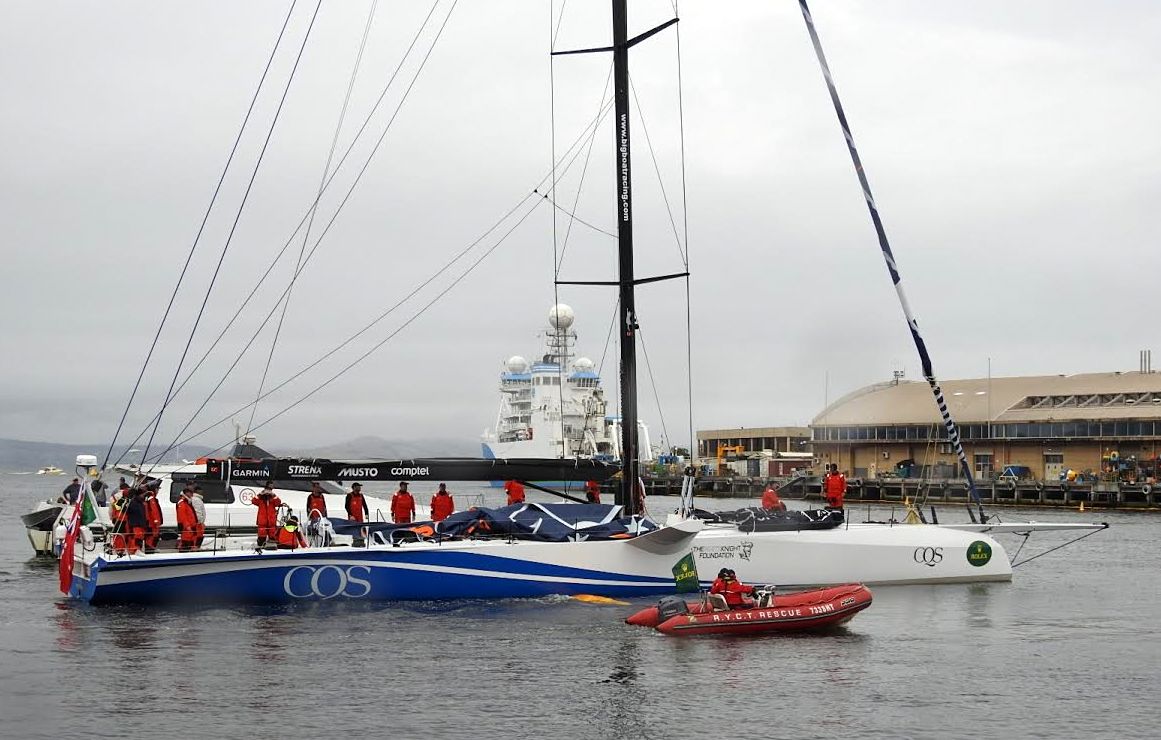 At one point, as Matt Allen’s wife boarded the plane for Hobart, Ichi Ban was ahead of UBox and as she sat down on the aircraft, who should be next to her but Wang Bin, owner of the Chinese entry. On comparing smart phones it could be seen UBox had slipped behind Ichi Ban. By the time those phones were switched again in Hobart, places had been reversed – it was that kind of race.

Throughout the third day, and as they entered what was to prove to be a relatively windless Derwent River, many of the main contenders were almost in sight of each other with Balance, Ichi Ban, Varuna 6 and UBox all in the same wind pattern 0-5 knots. While this was happening Alive, a local Hobart boat came round the corner and sailed strait past all of them and outside Storm Bay a second Cookson 50, and previous winner, Victoire was charging down the coast at a speed that was multiples of the four in the Derwent’s steely grip.

Initial estimates of ETAs were continually being stretched but the four crossed the line in relatively close proximity with the last member of the quartet being UBox around 1845.

In the meantime CQS arrived and did the customary parade along the wharfs. It was quite extraordinary watching her using her canting keel to “bow” to the assembled crowds as she paraded along the jetty before entering Constitution Dock. It has to be said that without exception each boat received a huge reception from the spectators, hospitality on arrival which, although in much smaller numbers, those gathered clearly matched the enthusiasm shown by the people of Sydney at the start just a couple of days earlier. 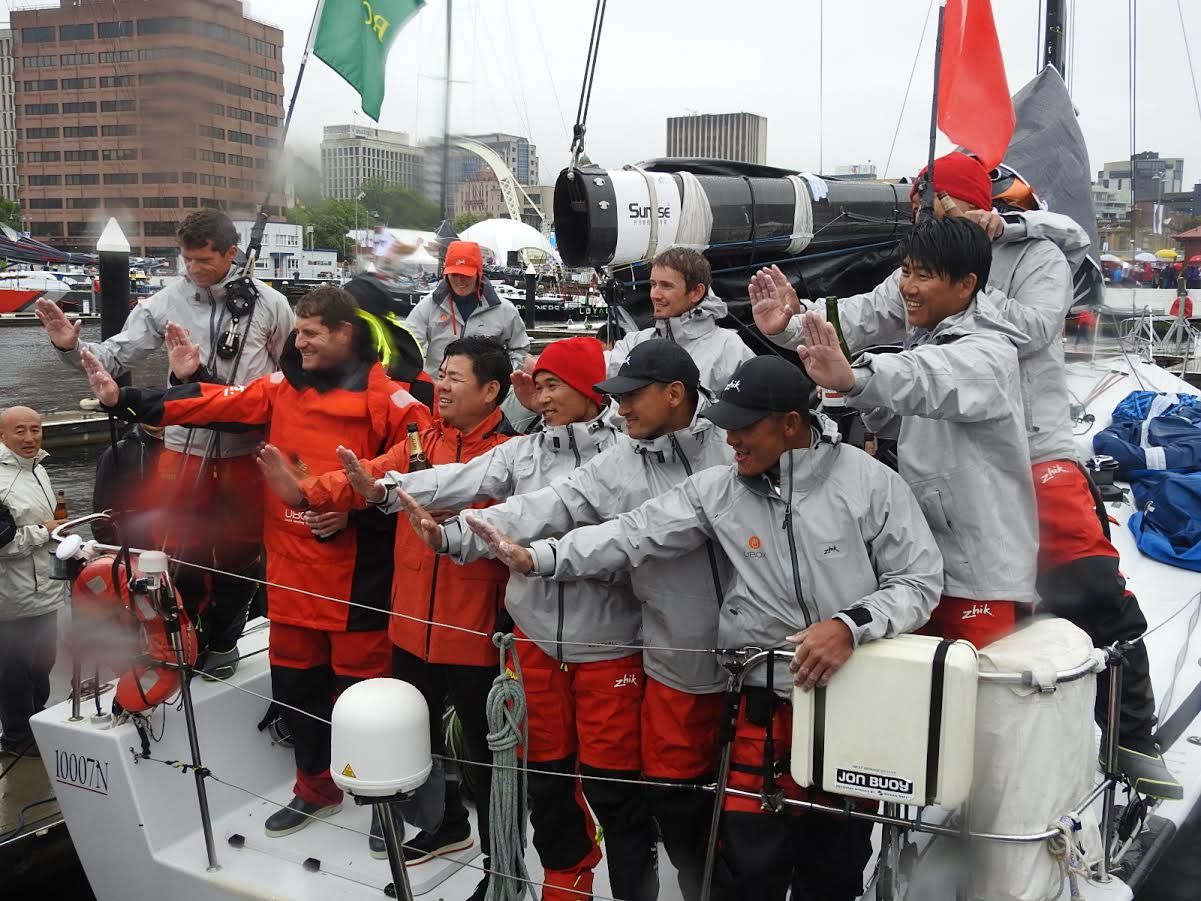 Ichi Ban and Varuna were followed up the river by Balance and, close behind, UBox who received one of the loudest welcomes, not least from the 50 or so Chinese who had flown in just to watch their friend’s team’s first entry in the Sidney Hobart.

For UBox skipper Charles Caudrelier, it must have been a love/hate moment as Giacomo, the boat that sat at the top of the leaderboard in IRC had been, as Groupama, his ride in the Volvo Ocean Race and of course as Franck Cammas’ Watch Captain did him proud. Now it was one of two boats sitting above him in the 2016 Rolex Sydney Hobart race.

As this report was started, in IRC it was Giacomo was 1st overall with Perpetual Loyal 2nd and UBox filling the podium in 3rd  while over in ORCi it was UBox that filled the top spot.

These positions looked pretty safe but it was not until the next day dawned after a night of little wind did these early arrivals start to breathe more easily as the majority of the racers still at sea had not had the opportunity to overhaul them with fresher breeze but it was very interesting to see some of the slower boats, including the oldest boat in the fleet being projected as filling the top ten.

However by lunch time on day 3 there had been no shocks to any of the already finished leaders and right now it is not exactly blowing dogs off chains here in Hobart.