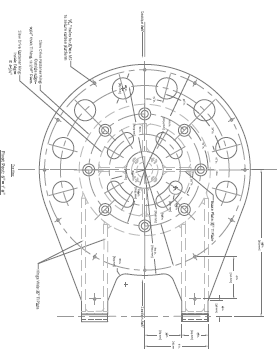 Last week we asked you to identify an odd-looking part, and now that the new Star Wars is wrecking the box office, the timing is perfect to tell you what it is.  It’s also a chance to remind you that the withering of print publishing (except for Seahorse, of course!) doesn’t necessarily mean great writing is gone.  You just have to find it in new places, and some of the best bits of sailing news come from industry folks looking to educate and interest potential customers in what they do.
News written by sailors with a business isn’t necessarily better or worse that any other source, but there are a few companies and classes that are doing a great job writing interesting stories about the sport, and when it comes to design tech you can nerd out on, the boys at Stephens Waring Design are some of the best.  And with that, we bring you the full story of what they call the Millenium Falcon, a very complicated solution to ingress and egress on the whacked out Trump-colored sloop Foggy.  Original story here, and sign up for the SWD newsletter here.
Not that long ago, in a boatshop not so far away, our former co-workers at Brooklin Boat Yard gave us a plumb gig: Engineer probably the single most complicated boarding system for probably the most unique sloop on the planet: the 74-foot, Frank Gehry/German Frers-designed Foggy II.
After a similar number of design hours that we’d put into the design of an average 40 footer — the Millennium Falcon was born.
The Falcon, as we have come to call it, is the central fitting for the do-it-all, transom-mounted articulated boarding stair that could also reach out and dock with a dingy,  tender, or other craft; and span straight aft, as a so-called passerelle, to act as a walkway for European-style wharves where boats dock stern-in.
And do all that, and still fold up and hide in Foggy’s clean flush transom. 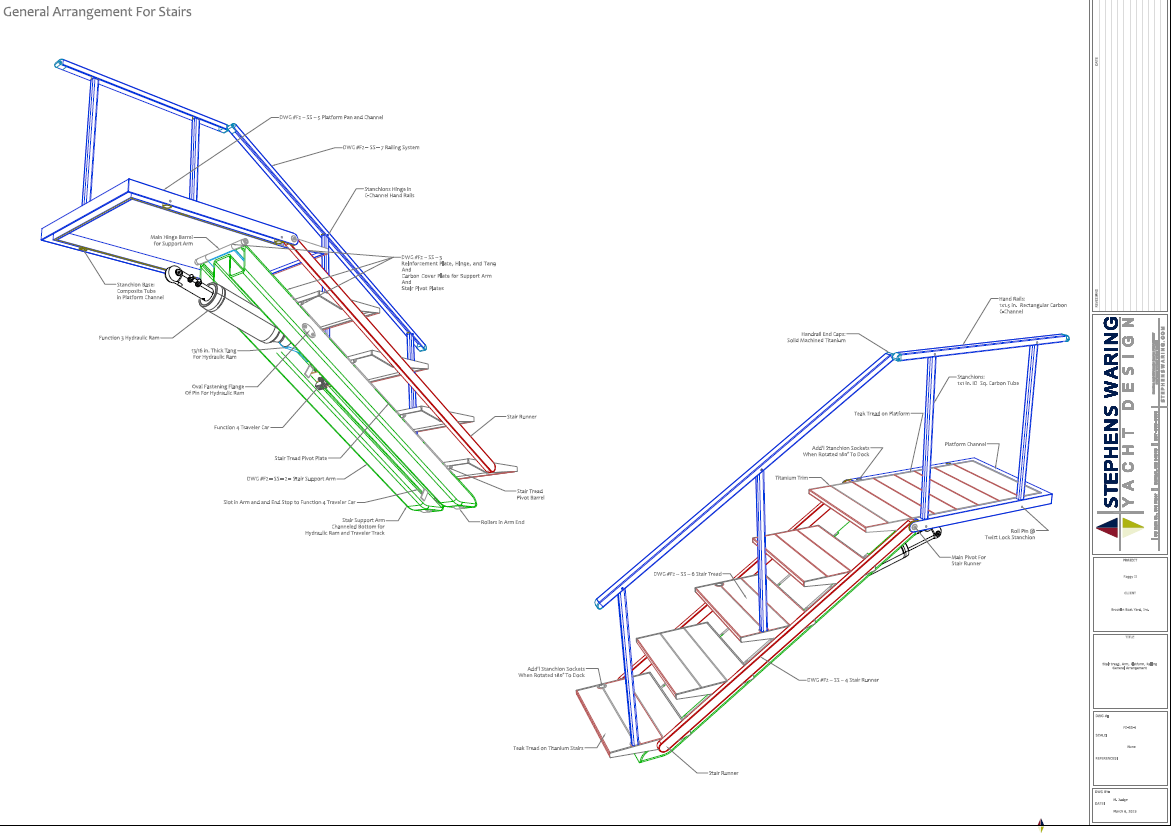 What our Millennium Falcon was born to do was tuck in neatly under the stop landing of the stair. See the big hydraulic ram that is on the left side of this drawing to the left? That is what has enough enough strength to bear the load of the stairs and lift the stairs and arm up and down. The entire structure moves in and out of Foggy’s stern on rails, driven by a carefully designed worm-drive and bearing arrangement. The heart of the system is a hydraulic slew drive that is a modern update on the worm drives that date back to ancient Alexandria. Slewing drives systems are the muscle behind solar trackers, wind turbines, man lifts, and other systems that must move heavy things in specific, repeatable ways.
The tricky part — and what made the Millennium Falcon boffo around here — was how it  could be both strong enough to get shoved about by the slew drive, but accurate enough to properly align the articulated stair where needed. The serious engineering it involved, if you care to know, is in this exploded diagram.
What’s happening here is the slew drive spins the Falcon fitting as it drives the ram and positions the underside of the top stairs to the rail system, the boat and the dock, tender or wharf as conditions merit.
Oh and did we mention, the whole contraption can carry enough load to work as perfectly suitable crane lift. The Millennium Falcon can help lift a 200-pound inflatable dingy up out of the water and plop it into the stern garage.
There’s no need to use “The Force, Luke.” Or Frank. Or for any body who steps on Foggy. The Millenium Falcon is engineered to do that heavy lifting for you.