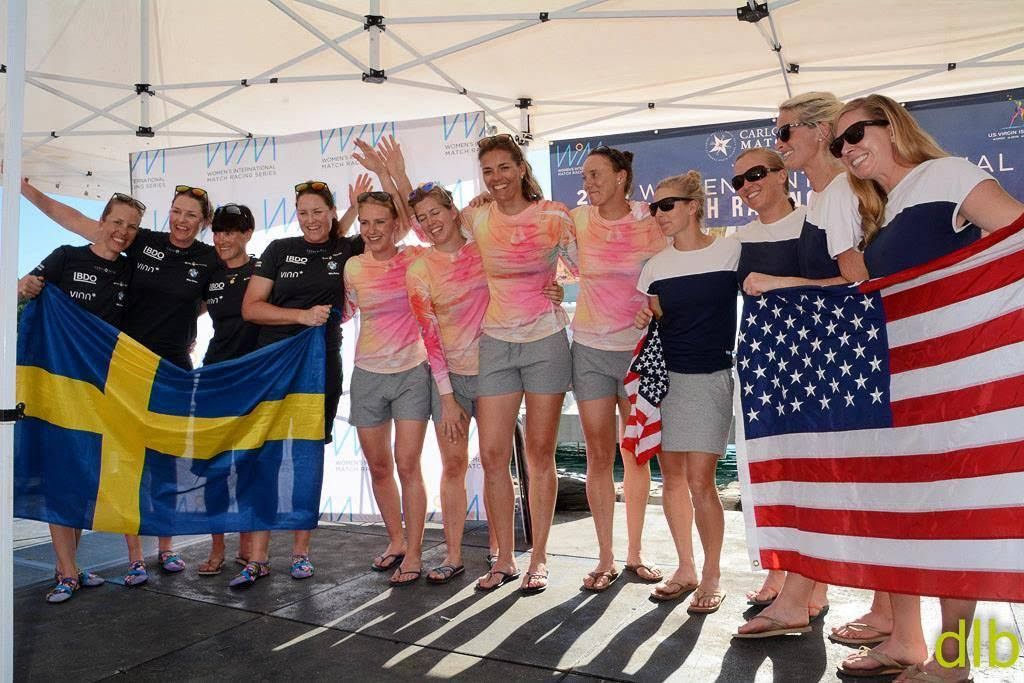 The Carlos Aguilar Match Race, the final event on the women’s’ international match racing tour (WIM) wrapped up both its series and its year on Sunday after four days of racing with top finishes by US favorite Stephanie Roble and her Epic Racing team who placed second overall in the 2016 WIM series. In the finals today, Roble placed second behind Olympic match racing star Renée Groeneveld and her Dutch team who won their first WIM Series event ever. The all-Swedish petite finale was also sailed between two teams with World Champion and 2016 WIM Series winner Anna Östling of Team Anna defeating Caroline Sylvan and her New Sweden Match Racing Team with two straight wins placing third in this event but first overall in the WIM series. The top team took home $25,000 for the series.

Roble’s who finished the WIM series in second place was presented with a check for $15,000. “Coming into this event there were five teams in play for second overall, and we knew it was going to be about winning the war, not the battle. That being said, we focused on winning every race we could,”  Roble said.

The St. Thomas venue provided the Caribbean waters and steady, but tricky breezes set on the harbor front of Charlotte Amalie. Because of their relative youth, not all of the teams had experienced these types of conditions. Many of the women were simply mesmerized by the tropical water and jumped over board after racing wrapped today. With a lot of spirit and camaraderie, many of the competitors said the Carlos Aguilar Match race was the best event ever.

The speed and precision of Dutch Olympian Renee Groeneveld and her team was remarkable and their flawless sailing made it tough for Roble to catch a break during the final races here.

“Going in to the finals we felt we had gained momentum and speed over the four days of racing, and we felt solid with a lot of energy,” Roble said after her disappointing defeat today against the Dutch. “St. Thomas is a place where I feel like I am competing in front of family and friends and we were so excited to do well. That being said, we just made a few mistakes today and that was all it took sailing against such an amazing team.”

Having lost only two matches during the whole event, Groeneveld looked very strong going into the final matches. “Everything fell into place for us, and I’m really happy to sail so well together with my team,” said Groeneveld, who took the 3rd podium position on the 2016 WIM Series.

“We had really good teamwork, really good spinnaker sets and drops, and the flow in our boat was the best,” said Groeneveld. She also echoed the sentiment when sending her regards to Regatta Director Verian Tuttle and others who ran the event. “This was the best match racing event I’ve ever been to. Can we please have a WIM Series event here next year again?”

Now in its fourth year, the WIM has seen over 350 sailors, 55 teams from 20 countries compete in the only women’s’ match racing circuit in existence. The 2016 WIM Series kicked off with the Helsinki Women’s Match in Finland in June followed by the Lysekil Women’s Match on the west coast of Sweden in early August. The World Championship and the Buddy Melges Challenge in Sheboygan, USA, was held in September, and then the Busan Cup Women’s International Match Race in Korea in October. Finally the Carlos Aguilar Match Race in the sunny U.S. Virgin Islands was, according to WIM executive director Liz Baylis, the most perfect way to conclude the fourth WIM Series season.

“The goal of the WIM series is that it is a place for women to do their best and have a place to match race. We have seen a lot of younger teams come up and some veteran teams raising the level of play,” Baylis said. “The gauntlet has been thrown down among some top teams and we think 2017 is going to be epic.”

to the end of the world

You Too Can Be Super

there is a jesus…