out with the old… 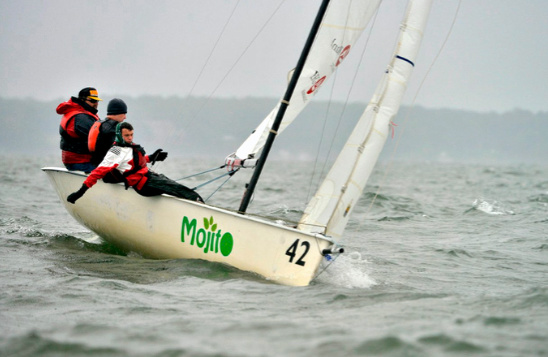 I’m the product of what community sailing can produce. I’m currently a high school racer, a viper Viper 640 sailor, and crew on a J88. I first began sailing as an eight year old but didn’t really love it. I faded in and out of the sport until I participated on a youth Big Boat Camp for a week. It was after this that I really fell in love with sailing. Without this camp, I would have never given sailing a second chance.
After the camp ended, I found myself looking for more opportunities to be on a boat. It started off asking a sailor in the local Etchells fleet for a recommendation. He told me that Mojito, a 25+ year old Viper, is always in need of crew so I should look there, so I did The owner showed me the basics, spin hoist, drop, and pole, and then told me we were going out. The first true regatta I ever sailed in was later that day. I was terrified. By the end of the day, my hands were held together by electrical tape and I couldn’t feel my toes from the cold. We did not do so well, placing last overall in that regatta, but the racing had me interested.
I liked being out with some of the best sailors in the fleet, but hated losing. I want to move to a more competitive boat, especially in the sportboat range, but in such a small sailing community that is difficult. I’m hoping, with the construction of the new facilities, it will bring competitive sailing into the public’s view, not as an exclusive rich kid sport, but something everyone can at least experience.
I do think the construction of the new sailing center is a huge step for Burlington as a sporting community, and I believe that this better reflects the changing attitude of the sport. Young people no longer need to be raised by a sailing family to participate at a competitive level. The sailing center will serve the local school district, which I am currently enrolled in. To my understanding, it is uncommon to see women in Hijabs sailing or to see a black kid and a white kid hauling the same sheet.The integration with the school district, a very diverse group of students, will help to break some stereotype of the sport. The competitive racing community will grow and become more competitive, and the sailing center will be a physical rendering as a new and accurate representation of how sailing is evolving as a sport.
I still think sailors need to step off their economic high horse if they really want to continue the sport. They need to shove their egos so far up their asses that when they see the new kids come speeding past, it won’t come back out. I like going fast and I know I’m not the only one on my team that thinks the same. I think the old and slow designs of C420’s have long passed their prime as a standard for high school racing. Will this ever change? Probably not because nobody has the balls to start the change.
-Joshua Scheidt
P.S.Thanks, this gave me a semi-valid reason to avoid a Lord of the Flies essay and a lab write up.
P.P.S. If anyone wants crew on a fast competitive boat HMU

happens to the best of us

the cape of sorrows

the end is nigh